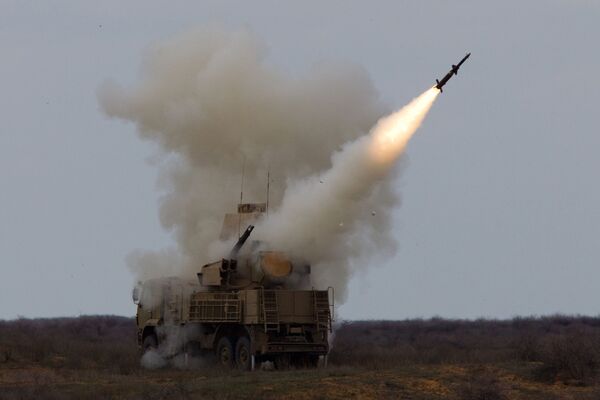 © RIA Novosti . Mikhail Fomichev
/
Go to the photo bank
Subscribe
Last week, a blog entry appeared on the Internet with photos showing intruders at a Russian air-defense base. A subsequent scandal prompted the Defense Ministry to announce an investigation into the incident and to tighten security.

Last week, a blog entry appeared on the Internet with photos showing intruders at a Russian air-defense base. A subsequent scandal prompted the Defense Ministry to announce an investigation into the incident and to tighten security.

Although intruders had taken photos at another air-defense base, all SAM bases look alike: covering an area of several hectares and surrounded by a perimeter barbed-wire fence, a base has a number of SAM launchers shielded with earth ramparts. A reinforced-concrete bunker between ramparts shields mobile command centers from a hypothetical preemptive strike.

It's not that difficult to penetrate the perimeter because no electric current runs through barbed-wire fences, and there are no German Shepherd guard dogs running around or even closed-circuit security cameras. This peace-time security system allows anyone wielding a telephoto lens equipped camera to snap images of the base from near the barbed-wire fence. The images in question proved so convincing that anyone can believe the intruders had actually penetrated the compound. Experts say most of the images posted on the above website were taken at a distance with long lenses.

Nevertheless, there have been occurrences when violators did manage to penetrate the barbed-wire fence. Although they should be held at a guard-house, they are usually reprimanded and expelled. As a result of the latest scandal, however, security has been tightened. Analysts say potential violators will now face sentries, whose mood is not very friendly after the relevant instructions and debriefings, and FSB operatives who will question their motives in entering a restricted area.

In Soviet times, special Interior Troop companies were assigned to guard each air-defense base. But such units have been disbanded. Eduard Sigalov, commander of the Fifth Air Defense Brigade, said mobile S-300 systems can be deployed in minutes, that they change positions every several hours, and that their mobility is the best security. Each SAM regiment has several main combat-duty positions and additional combat positions for deploying missile systems in wartime. Army units, which are supposed to guard such positions in case of war, must establish security zones making it impossible to hit missile systems with small-arms fire and other ground weapons used by saboteurs.

However, peace-time security also has to be tightened because other people, and not just nosy bloggers, are interested in military installations. Today, air-defense units virtually have to guard themselves, albeit not very effectively. An air-defense battalion has 80 officers and men, while a motorized-rifle battalion comprises at least 500 soldiers. Its personnel, including the commanding Lieutenant Colonel and a private/prime-mover driver, are charged with various duties and tasks and therefore should not be assigned to guard duty. So, diverting personnel could prevent the battalion from defending Russian air space, its main objective.

There are two options for rectifying this situation. First, guard units could be reinstated, facilitating the security of air-defense bases. Second, technical systems, including video cameras, infrared sensors, motion-detection sensors, signal mines, various other devices including remote-controlled machine-guns, would make it possible to compensate for manpower shortages. The Strategic Missile Force has already deployed similar security systems. Fences which are only good against law-abiding citizens should also be strengthened.

This program would cost a lot because several dozen SAM battalions with 8-12 missile launchers each are currently deployed around Moscow. However, security has always been expensive, and air-defense installations are now listed among important targets on a par with Strategic Missile Force silos and military-district command centers. These expenditures are justified because the world can hardly be described as tranquil. Several air-defense battalions, including one equipped with up-to-date S-400 Triumf (SA-21 Growler) SAMs, are, in fact, maximum-security military installations. But S-300 missile systems which have a less impressive potential than the S-400 fulfill no less important tasks.

Apart from the Moscow Region, S-300 SAMs serve with air-defense units in every Russian military district, forming the mainstay of the national air-defense system. The country's defense capability directly depends on their effective protection from unwelcome visitors, including curious bloggers and saboteurs.