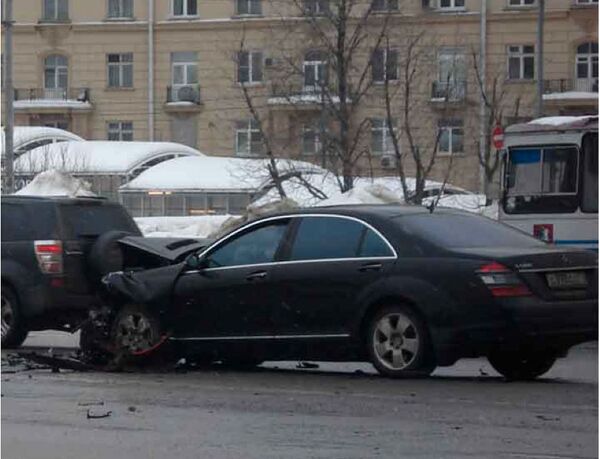 The accident occurred on February 25 on Moscow's Leninsky Prospekt when the chauffeur-driven Mercedes of LUKoil Vice-President Anatoly Barkov collided head-on with the small Citroen driven by Alexandrina.

"The results of the investigations did not find the LUKoil vice-president's driver guilty," Kolokoltsev said, adding that the Citroen driven by Alexandrina swerved into the oncoming lane and hit the oil executive's Mercedes head-on.

However, some witnesses claimed it was Barkov's Mercedes that swerved into the oncoming lane in an attempt to overtake traffic but then collided head-on with the doctors' Citroen.

Kolokoltsev denied speculation about alleged pressure from LUKoil over the case.

The accident sparked widespread public outrage, with a sustained media campaign calling for restrictions in the use of flashing blue lights on VIP vehicles that allow drivers to ignore traffic rules.

Accidents involving such vehicles are common in Moscow, and have sparked a protest movement, with drivers attaching blue buckets to their cars in mimicry of official blue lights. A series of "blue bucket" demonstrations were held in the Russian capital in April.

The February car accident is the subject of the song "Mercedes S-666" by outspoken rapper Noize MC, who recently spent 10 days in jail for mocking the police. It includes the lyrics: "Get out of the way, plebeian, watch you don't get under my wheels! Hey you group of commoners, patricians are on the road. We're running late for Hell!"