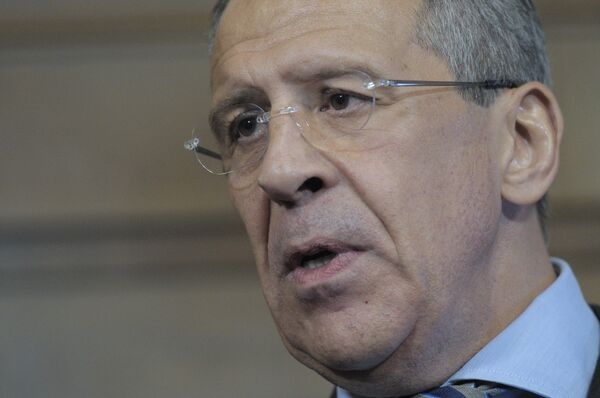 © RIA Novosti
/
Go to the photo bank
Subscribe
President Alexander Lukashenko's remarks suggesting Russia could have been behind an attack on its own embassy in Minsk are "obscene", Russian Foreign Minister Sergei Lavrov said on Friday.

President Alexander Lukashenko's remarks suggesting Russia could have been behind an attack on its own embassy in Minsk are "obscene", Russian Foreign Minister Sergei Lavrov said on Friday.

A day after Russia strongly condemned the attack, Lukashenko retaliated by saying that "thugs and scoundrels" from Moscow may be to blame.

"I do not want to comment on these obscene remarks," Lavrov said.

He added that there were some leads and suspects would soon be found.

"Let us wait until then," he said.

Unknown assailants threw two fire bombs onto the premises of the Russian Embassy in Minsk late on Monday. There were no casualties but one of the bombs hit a car. The incident sparked anger in Russia, with the Russian Foreign Ministry accusing "certain forces" of trying to "bring distrust and tensions to [Russia-Belarus] bilateral relations."

Lukashenko told journalists on Wednesday that a theory about Moscow's involvement in the incident was "interesting" and that police would investigate it.

"Most likely, they probably needed this incident. To demonstrate how bad Lukashenko is - why, he nearly carried out that "terrorist attack," as they put it, on his own. Thugs and scoundrels! There is nothing else I can say," the Belta state-run news agency quoted Lukashenko as saying.

He accused Moscow of orchestrating media attacks on him, apparently referring to a series of documentaries recently shown on the Russian TV, which portray Belarus as a country with political repression, no media freedom and rigged elections, ruled by "Europe's last dictator."

Lukashenko also said Russia had brought "unprecedented economic pressure" to bear on Belarus, but had failed in its aims.

Relations between Russia and Belarus have been strained over a host of issues lately, including energy and the South Caucasus. Earlier in August the Kremlin accused Lukashenko of failing to honor a promise to follow Russia's lead in recognizing the former Georgian republics of Abkhazia and South Ossetia.