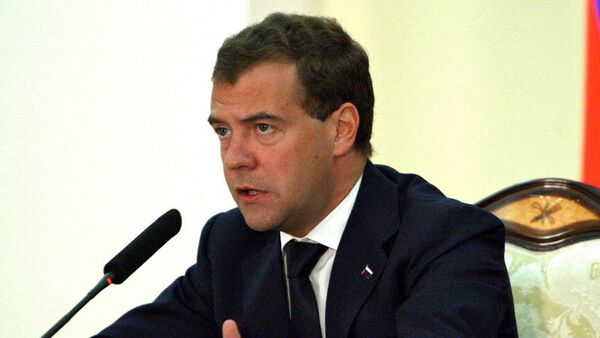 Belarus will take over the chair of the Collective Security Treaty Organization (CSTO) in December, Russian President Dmitry Medvedev said on Friday.

"We have agreed that Belarus will take over the chair of the CSTO in December. The president of Belarus has expressed his readiness to take it on," Medvedev said at an informal CSTO summit in the Armenian capital of Yerevan.

"This makes us very happy," he said, adding that the next CSTO summit will take place in Moscow in December.

Russia-Belarus ties have been strained lately over a series of issues, most recently when Medvedev accused President Alexander Lukashenko of failing to honor a promise to follow Russia's lead in recognizing the former Georgian republics of Abkhazia and South Ossetia.

Russia recognized the republics shortly after a five-day war with Georgia in August 2008 over South Ossetia.

Medvedev said the CSTO will help normalize the situation in Kyrgyzstan. The organization resisted calls to send troops earlier this year when unrest following the ouster of President Kurmanbek Bakiyev culminated in fighting between Kyrgyz and ethnic Uzbeks in southern Kyrgyzstan in June that killed at least 300 people.

The president said the CSTO will prepare amendments to its regulations in time for the December summit in order to prevent a repeat of the Kyrgyz situation.

"The lessons we have drawn from the events in Kyrgyzstan have prompted us to make the mechanism more effective," he said.

Medvedev added that, the CSTO should draw on the experience of NATO, the United Nations and the European Union.