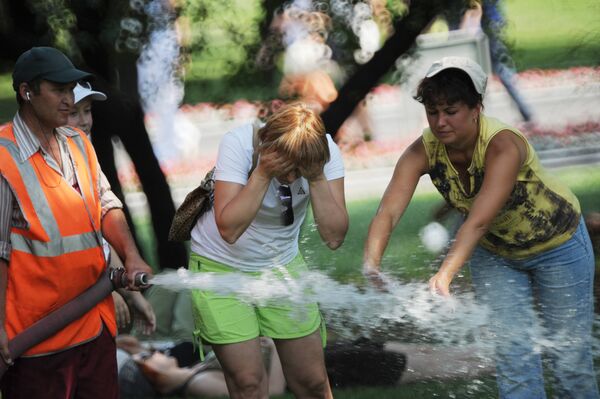 The 55-day heat wave that unleashed devastating wildfires in central Russia seems to have dramatically changed the way weather forecasters describe their job.

The 55-day heat wave that unleashed devastating wildfires in central Russia seems to have dramatically changed the way weather forecasters describe their job. Before they "forecasted" the weather, whereas now they "predict" the weather, which sounds a great deal less scientific. Meteorologists have become something like oracles, whose vague short-term forecasts are increasingly open to interpretation.

They are now telling us that the upcoming winter will probably be unusually cold, as extreme weather cycles are becoming more and more frequent. The key word here is "probably." Even Alexander Bedritsky, an adviser to the Russian president on climate issues and president of the World Meteorological Organization, is very guarded in his forecasts, saying that the heating season "predictions" will be ready by mid-September at the earliest.

As for next summer, no one dares venture such a long-term forecast. Forecasters, fed up with being held responsible for the unusual weather this summer, are trying to avoid being too specific. They are also providing very vague explanations for the ongoing heat wave.

The Intergovernmental Panel on Climate Change (IPCC) has attributed the droughts and floods stretching from Europe to Pakistan to climate change caused by greenhouse gas emissions. In 2003, France experienced a similar heat wave. British experts attribute it to a strong blocking anticyclone and jet flows (strong winds at an altitude of 7-10 km in the middle troposphere). The Russian Academy of Sciences' Institute of Geography, on the other hand, points to global changes in atmospheric circulation. Some experts blame the heat on the replacement of warm currents (El Nino) by cold ones (La Nina) in the tropical part of the Pacific.

Regardless of what the weather oracles say, the only thing we can be certain of is that the climate is becoming less stable. Large temperature fluctuations between extremely cold winters and extremely hot summers are becoming the norm.

Weather cycles are becoming increasingly protracted, lasting up to two months at times, and extremely variable. For example, this summer's heat wave in central Russia was accompanied by heavy rains and floods in Poland, Germany, the Czech Republic, and Lithuania, as well as Pakistan and China, an extremely cold summer in Siberia (which was invaded by arctic air), and an astounding low of -20 degrees in July in South America.

While far from perfect, weather predictions still abound. What meteorologists can't tell us is how we are supposed to cope with these changes. Mr. Bedritsky counsels that in "consistently extreme" conditions, we should "first adapt to the extreme weather conditions, and second, minimize our impact on the global climate," as climate change is being driven by human activity.

Mr. Bedritsky's second point is fairly obvious. President Dmitry Medvedev declared on the eve of the UN Copenhagen summit on climate change in December 2009 that by 2020, Russia will cut its greenhouse gas emissions by 25% compared to 1990 levels. Experts believe that this is a realistic target.

What is less clear is how we are supposed to adapt to this new extreme weather. Biological adaptation to climate change is obviously a long process that is difficult to predict. A more practical approach would involve early warning systems and rapid relief efforts. It may be an expensive project, but the current heat is proof that it is desperately needed.

The process of modernizing Russia's meteorological observation systems is nearly complete. Most of the 1,800 weather stations in Russia have already been furnished with new equipment. As reported on the web site of Roshydromet (Federal Service for Hydrometeorology and Environmental Monitoring), seven new weather stations and two hydrological posts with new equipment have been established, not counting the 148 temporary stations opened for the flooding season.

The launch of the next-generation high-tech Meteor-M1 weather satellite marked the beginning of the revival of Russia's satellite group. Supercomputer labs at the World Meteorological Center in Moscow and the Central Geophysical Observatory in St. Petersburg were commissioned in 2009. Two additional labs were opened at the regional meteorological centers in Khabarovsk and Novosibirsk. In fact, the computers proved to be even more powerful than originally expected.

Efforts to modernize Russia's observation networks have met with less success. There is a shortage of Doppler radars, which are capable of registering even the subtlest changes in the weather, thereby ensuring the most accurate forecasts possible. Russia needs at least one hundred Doppler radars at meteorological stations by 2015, experts say. Of course, this would be an extremely expensive undertaking, at $1,200,000 per radar.

In general, detailed daily weather forecasts require an extensive network of observation stations. China, for example, has 35,000 stations - a number beyond Russia's wildest dreams. And the price of advanced meteorological equipment, including Doppler radar, is unlikely to decline dramatically in the near future, as they are based on unique technological innovations.

On top of that, we still lack the necessary techniques for forecasting extreme weather phenomena and atmospheric circulation. This should come as no surprise, as the recent spate of natural disasters is unprecedented in the 130-year history of meteorological observation. But the current heat wave is not entirely without precedent. If we believe the historical records, Russia experienced 12 droughts in the second and third quarters of the 14th century. Heat waves also struck Russia in the 1930s, with peak temperatures recorded in 1936 and 1938.

In Russia, these long-term meteorological studies are conducted over 30-year period. The previous study was conducted from 1960 through 1990. The latest period began in 1991, and it is already clear that nature's whims have increased in both number and intensity. Droughts and floods are recorded in Russia almost every year now. Hurricanes have become more frequent due to the clash of contrasting hot and cold air currents (temperature fluctuations are constantly increasing). Summer is either too hot or too cold. The annual damages incurred as a result of natural disasters range between 30 and 60 billion rubles.

Given all this, meteorologists say that they need improved weather forecasting techniques, including more accurate mathematical modeling. The IPCC and Roshydromet together with the Russian Academy of Sciences are warning the public to brace themselves for new heat waves. What they can't tell us, however, is when to expect them and how to cope with them. Meanwhile, the Ministry of Natural Resources has proposed reforming Roshydromet. The ministry has submitted to the government a development strategy for the service through 2030, which calls for greater efforts to modernize Rushydromet beginning in 2020 to bring it up to world standards.