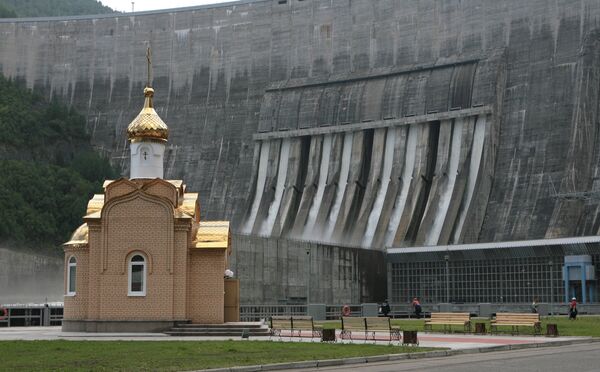 © RIA Novosti . Aleksandr Kryazhev
/
Go to the photo bank
Subscribe
A mourning ceremony for dozens of people killed last year in a major accident at the Sayano-Shushenskaya hydro-power plant began in Siberia.

A mourning ceremony for dozens of people killed last year in a major accident at the Sayano-Shushenskaya hydro-power plant began in Siberia.

The August 17 disaster at the country's largest hydroelectric power station on Siberia's Yenisei River in the Republic of Khakassia killed 75 people and destroyed a turbine hall. The accident also destroyed three hydropower units and damaged the other seven.

"A ceremony to consecrate an Orthodox chapel on the hydropower plant, began on the anniversary of the disaster. Then a memorial service will be served for the victims at the cemetery where they are buried," the press service of the plant's owner, RusHydro, said in a statement.

The plant is currently under reconstruction. All repair works at the hydropower plant are expected to be completed by December 2014.

So far, only three units have been put into operation.

The Russian industrial safety regulator, Rostekhnadzor, announced on October 3, 2009, the results of its probe into the disaster. The report said a number of aspects, including design, operation and poor maintenance work, had caused the tragedy.