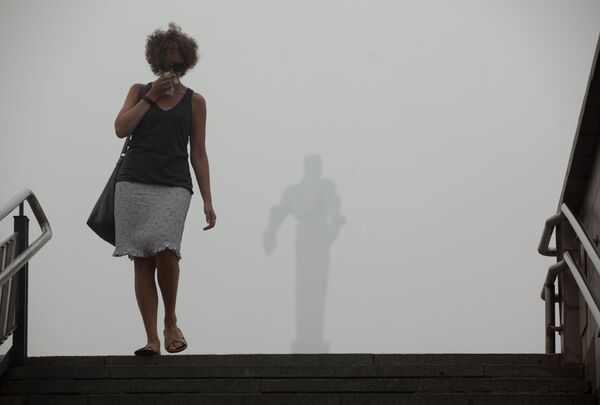 © RIA Novosti . Mikhail Fomichev
/
Go to the photo bank
Subscribe
Moscow was shrouded again in a thick layer of smog on Monday evening after a few hours of relatively clear skies due to a brief change in wind direction.

Moscow was shrouded again in a thick layer of smog on Monday evening after a few hours of relatively clear skies due to a brief change in wind direction.

The smog in the Russian capital has been far worse than usual for more than a couple of weeks as smoke from nearby peat bog and forest fires has mixed with exhaust fumes and other pollutants, bringing pollution to an all-time high of 6-7 times the norm over the past weekend.

According to meteorologists, carbon monoxide levels on Monday afternoon were 5 times higher than the maximum allowable concentration before dropping to 2 times lower the norm for several hours. They are rapidly rising again, forcing Muscovites to wear protective masks.

A scorching heat wave has gripped much of European Russia since mid-June, sparking wildfires and causing the worst drought in decades.

The fires have been burning for two weeks, with a total of 51 people reported killed. The hot weather is forecast to continue well into the week, and the southerly and easterly winds blowing smoke across the capital are not expected to shift for at least a couple of days.

Local authorities in the Moscow region and six other regions have declared the state of emergency due to wildfires, which are raging in a total of 17 Russian regions.

The record-breaking heat wave in central Russia will continue through mid-August, meteorologists say.