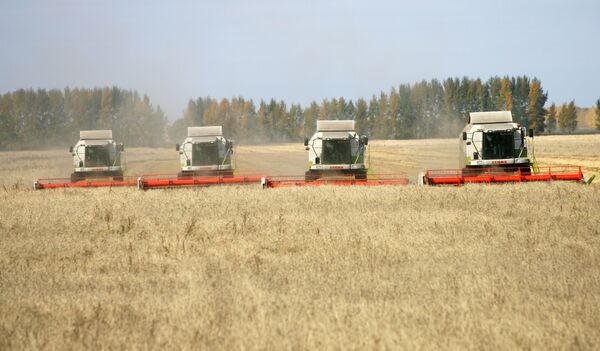 "According to the latest Agriculture Ministry forecasts, the harvest will be much more modest than we assumed at the beginning of the year. It could total 65 or even 60 million tons," Putin said, adding that Russia's domestic grain requirements for 2010 amounted to 78 million tons.

The Russian government announced a ban on the export of grain and grain products on Thursday due to the worsening drought.

"We cannot yet expect a quick lifting of the export ban," Putin said.

The ban will last from August 15 to December 31, though First Deputy Prime Minister Igor Shuvalov said the dates may be changed after the harvest is calculated in October.

The Russian premier said that despite the low grain harvest this year, Russia will be able to fully make up for its internal demand due to the intervention fund of 9.5 million tons and last year's surplus of 21 million tons.

Russia is suffering the worst heat wave in the 130 years since records began. Wildfires continue to rage across much of the central part of European Russia as the country experiences temperatures of up to and above 40 degrees Celsius (104 degrees Fahrenheit).

Russia declared a state of emergency in 27 regions as 10.7 million hectares of agricultural crops were killed.

The government will distribute grain from the state intervention fund without auctions to regions suffering from the heat wave, Putin said earlier.

During the past agricultural season (July 2009-July 2010), Russia exported 21.4 million tons of grain. It has shipped more than 1 million tons since the start of the new season.