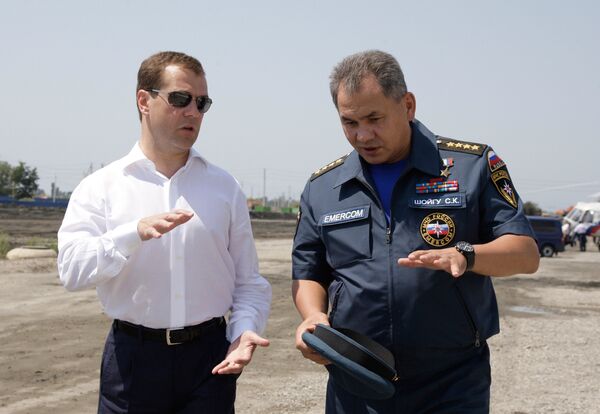 Russian President Dmitry Medvedev will on Wednesday hold a meeting of the country's Security Council dedicated to fire safety measures for strategic facilities.

Russian President Dmitry Medvedev will on Wednesday hold a meeting of the country's Security Council dedicated to fire safety measures for strategic facilities.

"The key aim of the meeting will be to elaborate and adopt additional measures to ensure fire safety of facilities and increase their protection," the Kremlin said.

High-ranking officials from the Emergencies Ministry, the Prosecutor General's Office and other organizations will attend.

At least 40 people have died and over 3,000 have been left homeless by fires which have swept across the central part of European Russia. The wildfires have been sparked by temperatures up to and above 40 degrees Celsius (104 Fahrenheit).

Medvedev on Tuesday ordered Emergency Situations Minister Sergei Shoigu to draw up a special program to boost the firefighting service.

Medvedev said the program should also ensure sufficient numbers of vehicles and other means of transportation, including airplanes.

He said there was a pressing need to adopt "advanced firefighting equipment, modern fire safety systems."

On Monday, Medvedev introduced emergency measures in the seven parts of Russia that have been the worst affected by wildfires.

Emergency regulations are enforced in the Republics of Mari El and Mordovia, as well as the Vladimir, Voronezh, Moscow, Nizhny Novgorod and Ryazan provinces.

Prime Minister Vladimir Putin on Monday ordered the heads of Russian regions to "clean up their act" on wildfires, adding they would be held personally responsible for building new homes for the victims of wildfires.