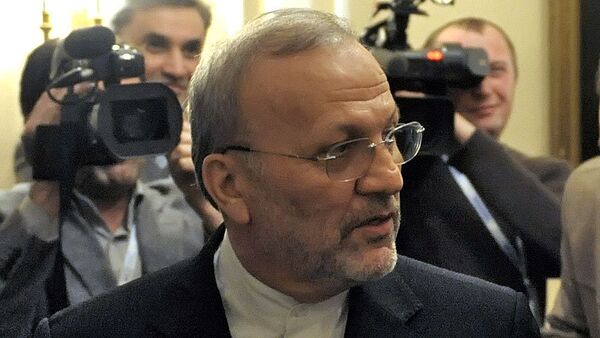 "These remarks are at odds with reality," Iranian Foreign Minister Manouchehr Mottaki said during a press conference at the Iranian embassy in Madrid, stressing that Tehran has always sought only peaceful uses for nuclear technology.

Medvedev warned on Monday that Iran is close to acquiring the capability to make nuclear weapons. He urged Russian ambassadors to move away from "simplistic approaches" toward the Iranian nuclear problem, adding that nuclear weapons capability is not prohibited by the Nuclear Nonproliferation Treaty.

"We don't know the objectives behind such remarks," Mottaki said. "We want our own rights and we won't be satisfied with any less."

Alaeddin Boroujerdi, head of the parliamentary National Security and Foreign Policy Committee, earlier on Tuesday cautioned Moscow against being taken in by the "false information" presented by U.S. and British intelligence agencies.

"We expect Russia, as a powerful country, not to be fooled by the false information planted by American and British spy agencies," he said.

He said Medvedev's comments on Iran's nuclear program were "divorced from reality."

Medvedev reiterated Russia's position that sanctions "are not producing the desired results" but admitted that Iran was "not behaving in the best manner."

On June 9, the UN Security Council passed Resolution 1929 imposing a fourth set of sanctions on Iran over its nuclear program, including tougher financial controls and an expanded arms embargo.

"We are consistently urging Tehran to show the necessary openness and cooperation with the International Atomic Energy Association," the Russian president said.

He said the main goal of the latest UN resolution on Tehran was to restart the negotiation process as soon as possible.