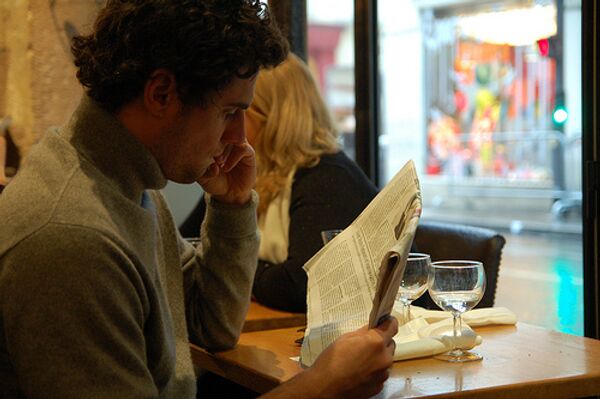 Russia's Institute of Contemporary Development (INSOR) and the energy policy and energy efficiency committee of the Russian Union of Industrialists and Entrepreneurs on Wednesday held a round table to discuss the global energy market, the lessons of the crisis and development prospects.

Leonid Grigoryev, president of the Institute for Energy and Finance, called the current oil price "a collusion" between producers and consumers. It seems to suit all market players, including the future investors Russia hopes to attract.

Analysts also discussed an energy efficiency program for Russia, which produces 11%-11.5% of the world's primary energy and exports more than half of that amount. Spending on energy production equals 4%-4.5% of GDP in Russia, whereas the world's average is 1%, Grigoryev said. Cuts in spending on fuel in industries would benefit consumers.

"The traditional oil and gas market is shrinking," said Vitaly Bushuyev, general director of the Institute of Energy Strategy. Besides, oil prices are likely to plummet in seven years; they will be about $70-$80 per barrel until 2016 but will start falling in 2017 and eventually reach $30, although not quickly.

Bushuyev said that scenario is connected to the U.S. plans to have electric engines in half of the country's cars by 2020. "This will greatly undermine the global demand for oil and boost the development of gas-fuelled power generation," the analyst said.

Russia's oil exports will decrease, while domestic demand and refining will grow. By 2030, oil refining in Russia is forecast to grow 21% and production 9.2%, while export will fall 6.2%. The decrease in revenue due to falling oil prices and export will be compensated by a growth in the export of natural gas, which will be in greater demand than coal and renewable energy sources.

In other words, Russia will change its dependence from oil to natural gas.

U.S. ExxonMobil has published a more optimistic forecast; it expects that global energy demand in 2030 will be almost 35% higher than in 2005, even accounting for the recession.

"Growth will be led by rapid expansion in non-OECD countries such as China and India, where energy usage will rise by about 65%," ExxonMobil writes in its recent report, "Outlook for Energy: A View to 2030."

Oil and natural gas will remain essential, but other sources including nuclear and renewables (e.g., wind, solar and biofuels) will play an expanded role, the oil producer writes. Demand will be particularly intense for electric power generation, which will comprise 40% of global energy demand by 2030.

The government has submitted a bill to the State Duma, extending the range of information considered a state secret. Now data on counter-terrorist activities will also be classified.

But according to the authors of the Law on State Secrets, these new restrictions will not affect the role played by civil society institutions in countering terrorism.

On the contrary, judging from an explanatory note to the draft law, excessive secrecy often surrounds documents related to operational investigations, "creating certain obstacles" to their further use and "weakening the anti-terrorist protection of the state."

The bill's authors ascribe that excessive secrecy to the inadequacy of existing regulation and what they suggest aims to make up for that deficiency.

The bill qualifies all information relating to the protection of critically important and potentially dangerous infrastructure facilities against acts of terrorism and sabotage as a state secret.

All information on operational investigations and counter-terrorist activities is now, essentially, classified.

Publishing data on resources allocated to counter-terrorism measures will be banned. Even facts relating to the preparation of terrorist acts are not to be revealed.

The bill proposes that information "on forms, methods and conditions of the organization and planning of terrorist activity" should also be considered a state secret.

The results of financial monitoring of organizations and individuals screened for possible involvement in terrorist and extremist activity will also be given a secrecy grading.

Commenting on the bill to journalists, Gennady Gudkov, deputy chairman of the State Duma's security committee, said that the current Law On State Secrets covers enough ground as it is.

"The amendments could be agreed to if the bill defined such notions as 'critically important and potentially dangerous infrastructure facilities'."

In effect, according to Gudkov, practically all facilities today are "potentially dangerous," some because of their run-down state and others due to their vulnerability.

Unless the terms used in the document are given a clear interpretation, information on agro-industrial facilities such as pig and poultry farms could also be classified, in accordance with the letter of the law.

In addition, over-secrecy in counter-terrorist activity could, in Gudkov's view, prevent measures taken being properly assessed.

Russia has decided to overhaul its obsolete Black Sea Fleet by 2020. The keels of the first ships will be laid this year.

Admiral Vladimir Vysotsky, Commander of the Russian Navy, said on Wednesday that the Black Sea Fleet would receive 15 new ships by 2020, and that warships would outnumber submarines two to one.

These ships are included in the draft state arms procurement program, due to be approved this fall, a top manager of an enterprise affiliated with the United Shipbuilding Corporation (USC) and a Defense Ministry official told the paper.

In effect, the Black Sea Fleet will be completely modernized. A Black Sea Fleet officer said it now had six capital warships, including the Moskva cruiser, the Kerch and the Ochakov anti-submarine warfare (ASW) ships, three escort ships and 20 small ASW ships and speed boats.

Some of these obsolete ships were built in the late 1960s and should be decommissioned together with two non-operational submarines by 2020.

Russia's leaders are correct to opt for a rapid overhaul of the Black Sea Fleet in the context of the August 2008 conflict with Georgia and the regional geopolitical situation, Moscow Defense Brief editor-in-chief Mikhail Barabanov told the paper.

In 2008, Russia had to involve virtually all combat-ready Black Sea Fleet ships in the conflict. The Russian military were also seriously alarmed after one modern U.S. Navy destroyer called in at Batumi, Georgia. The conflict became the most important motivation for upgrading the Black Sea Fleet, Barabanov said.

This plan is the first top-level post-perestroika decision to completely reequip an entire military formation, said Konstantin Makiyenko, deputy director of the Center for Analysis of Strategies and Technologies.

Although not all the new ship types have been approved yet, they will include three upgraded Project 636 Varshavyanka (Kilo class) submarines, three to four Project 11356 Krivak-class stealth frigates and six Project 21632 Tornado class missile/artillery boats, a Defense Ministry official and a top manager of an USC enterprise told the paper.

Barabanov said the Black Sea Fleet and, to a smaller extent the Baltic Fleet, were more likely to take part in real combat operations than the Northern and Pacific fleets, and that it made sense to modernize the latter two only after Russia had resolutely asserted itself in the Black and Baltic Sea regions in line with the legacy of Peter the Great.

Compared with the beginning of the year, the proportion of companies taking on new personnel worldwide increased from 1 percent to 54 percent, according to recruiting company Antal Russia.

The proportion of companies planning to hire has risen from 55 to 58 percent, while that of companies laying off personnel fell from 28 percent early in the year to 22 percent by mid-year.

Of 220 companies surveyed in Russia, 66 percent are opening new manager level vacancies, Antal's study says. In this respect, Russia, along with Belgium (at 66 percent), continues to lead in Europe.

Among the BRIC countries, Russia is third in these employment trends. By mid-year, 72 percent of companies in China will offer manager level vacancies, 73 percent in India. Brazil (65 percent) is slightly behind Russia.

"In recent months, our clients have shown greater confidence in the future of the market," says Antal Russia managing director Michael Germershausen. "Most of the companies we deal with are returning to active recruitment, and this applies to a variety of sectors. Companies have learned how to manage more efficiently, but they are opening more administrative vacancies to manage the expected growth."

The highest demand for managers in Russia is in retail (77 of companies are taking on new staff) and IT and telecommunications (74 percent). In the banking, finance and investment sector, about 63 percent of companies are recruiting managers.

AVANTA Personnel public relations officer Nadezhda Lyakhovskaya says that during the crisis there were 20 resumes per vacancy, there are now only three or four.

"The last two months have seen a big jump, compensating for the lull at the beginning of the year," she says. "Our forecast is this: the summer will see its traditional lull, which will lead to a September-October job market that may fully recover."

"Before the crisis, construction companies led in numbers of vacancies, now, however, the FMCG sector, finances, and pharmaceuticals are the three leaders. Administrative personnel, dismissed during the crisis, are being rehired. Demand is growing for personnel, marketing and public relations managers. This is a good sign because demand for these professionals is the last to come back," Germershausen says.

Patriotism on the rise in Russia

As many as 84 percent of Russians describe themselves as patriots, albeit with varying degrees of confidence, according to a survey by the VTsIOM national pollster.

Out of that number, 41 percent said they were "definitely patriots," and 43 percent "rather patriots than not." More than three-fourths of respondents defined "patriot" as "someone who loves their country," VTsIOM director Valery Fyodorov explained. Extreme interpretations of the term are no longer valid, he said: to be a patriot, one does not need to abuse other countries or justify and find excuses for everything at home. Such extreme sentiments were revealed by a mere 5-8 percent of respondents.

Yet, 10 percent said they were not patriots, and Fyodorov has failed to grasp their reasoning. In any case, he said, the word "patriotism" has finally lost its derogatory connotation; to be a patriot is right and good again now. This has been a growing trend since the 2000s, he said.

The survey revealed that ethnic identity does not come first with Russians. When answering who they are, the majority of respondents (58 percent) picked the "Russian national" option, while 30 percent selected "just a person." Only 18 percent (fourth place) mentioned their ethnicity, and as few as 5 percent, religion - fewer in fact than the 15 percent that still identify themselves as "Soviet people."

However, according to Fyodorov, this public spirit seems to prevail these days because Russia has emerged as a relatively mono-ethnic country, in which ethnic Russians account for 85 percent of population. This kind of ethnic homogeneity to some extent nourishes civil patriotism.

Russian patriotism is different from the usual sense of the word, according to Sergei Ivanenko, member of the Yabloko party political committee. In Russian mentality, it is not simply a love of the country, but rather a reverence for the state and the current government. That is why, once an opposition leader begins criticizing the government, the patriots immediately respond with their usual indignant rhetoric: "Why do you hate Russia so much?!"

This kind of patriotism is dangerous, because it consolidates society around a government only as long as the public sees this government as good. Once this government uses up the resource of being "good," the old patriotic consolidation becomes an excellent ground for rebellion, Ivanenko said. Yet, he believes the VTsIOM poll results were encouraging, because national chauvinists appeared to be a minority among Russian patriots.