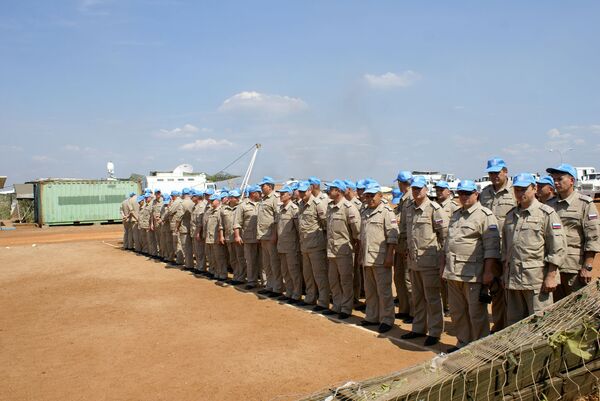 Russia will airlift about 120 personnel to Sudan Wednesday as part of an international peacekeeping operation there, the Defense Ministry said.

Russian peacekeepers have been in Sudan since April 2006, providing transport services for UN military observers, escorting freight shipments and carrying out rescue and other operations. They are rotated every six months.

Spokesman Lt. Col. Vladimir Drik said an Il-76 transport plane would take off from the Chkalovsky airfield later on Wednesday and deliver around 100 personnel and equipment to Sudan.

It will be followed by an An-124 Ruslan heavy-lift airplane that will transport four Mi-8 MTB helicopters and 10 personnel.

On June 29, another transport plane will deliver essential materiel and technical equipment.

In March and April, the Russian helicopter unit transported almost 1,800 passengers and more than 86 metric tons of cargo as part of preparations for the country's general elections. The Russian peacekeepers also delivered ballots to polling stations in southern Sudan.

Personnel from the group were awarded UN medals in May for their outstanding performance in the region.

The UN Mission in Sudan was established in 2005 to monitor the peace agreement between the government in Khartoum and the Sudan People's Liberation Movement in southern Sudan, which ended the longest-running civil war in Africa.