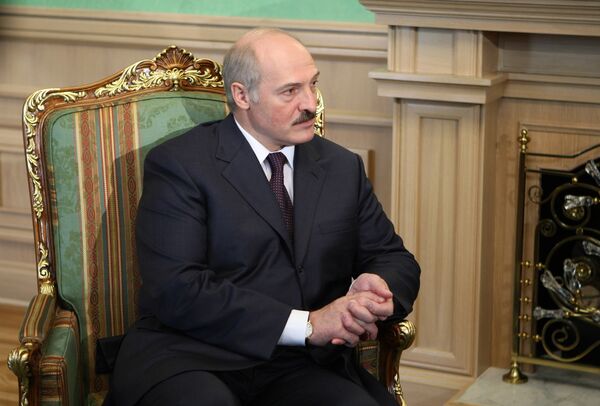 "As a goodwill step, we propose removing customs barriers and customs duties on petroleum products now, and we will wait until the beginning of next year regarding oil duties; but the duties must be removed from January 1," he told journalists in the town of Shklov.

"In this case we are ready to sign all documents in Russia's interests without waiting for January 1," Lukashenko said, adding that this position was outlined at recent talks with Russian President Dmitry Medvedev in Moscow.

The Customs Union between Russia, Belarus and Kazakhstan formally came into existence on January 1, 2010, but is unable to start working fully until disputes are resolved and the customs code comes into effect.

The code was due to start operating on July 1, but at the end of May the three former Soviet republics failed to resolve disputes at a meeting in St. Petersburg. Russia, Belarus and Kazakhstan signed an agreement on the creation of the customs code in the Belarusian capital, Minsk, in November 2009.

Lukashenko also said: "If we create a union, including the Customs Union, we should necessarily create equal conditions for [all] Customs Union participants - this is the key principle."

Otherwise, he said, there could be no discussion of a union. "We have three members in the Customs Union, and Russia's attitude toward Belarus and Kazakhstan on one and the same issue is different," he said.

"For Kazakhstan it's duty free, and here [Belarus] with duty, that's why this issue was discussed with Dmitry Medvedev," Lukashenko said.

The disputed issues between Russia and Belarus include export duties on Russian oil and petroleum products to Belarus and the import of foreign cars and aircraft into the Union's customs territory.

Russian First Deputy Prime Minister Igor Shuvalov said Thursday the three heads of state will meet in the Kazakh capital of Astana on July 5 to decide which format the Customs Union will adhere to.