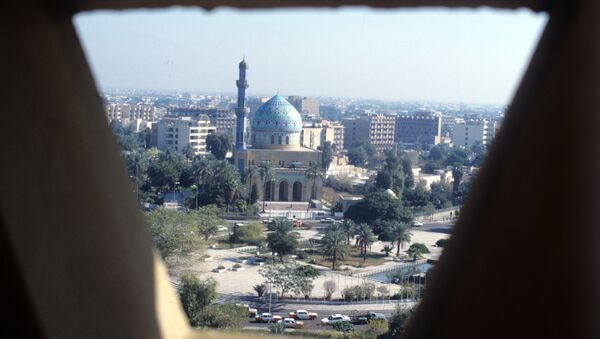 © Sputnik / Igor Mikhalev
/
Go to the photo bank
Subscribe
In the beginning of US intervention in Iraq there was talking that democratization will lead to the economic prosperity. In practice it turned out to be wrong.

This story by Eldar Kasayev, expert on investments in energy sector of the Middle East and Africa, Strategic Culture Foundation expert, was published in International Affairs magazine.

In the beginning of US intervention in Iraq there was talking that democratization will lead to the economic prosperity. In practice it turned out to be wrong. In 2005, the constitution of Iraq was approved, Iraq was proclaimed a democratic state and the presidential and parliamentary elections were held (the second elections were held in March 2010). On the results of the elections the new government was formed, but put it lightly - the development of the Iraqi economy leaves much to be desired.

Before the US began to export its democracy to Iraq the country was one of the main trade and economic partners of Russia in the Middle East. For that moment the attractiveness of the Iraqi market for Russia was defined by the country’s high paying capacity, guaranteed by the second in the world oil reserves, and good export prospects.

On the one hand, under Saddam Hussein the members of the Baath party occupied the key ruling positions in all spheres of life of the Iraqi society and it was a common practice among them to distribute part of oil export profits between each other. Such practice is known as the muhassa system (“proportional distribution”) and from the perspective of the Western economic model it was the way to stagnation. However, on the other hand it ensured a certain degree of stability in Iraq where people got used to this system. As Evgeny Primakov who is an excellent expert on Iraq, would say, there is a specific nature there. Indeed the economic development of the country is ensured by the evolution of traditional economic practices not by the planting of the Western democracy.

Before the democratization began in Iraq the representatives of the US did a lot of talking about big oil deposits on the territory of the country saying that hydrocarbons will ensure the development of the Iraqi economy and lead it to the modernization.

However when it comes to the distribution of the contracts aimed at sooner economic restoration of Iraq not everything is transparent.

According to al Khafaji, an Iraqi citizen who worked with the US State Department before the war, the companies which received contracts signed up to six subcontracts with other firms and each of those firms received its share. But in many cases none of those firms started working under the contract. For example, private US “CusterBattles” company received contracts for $100 million in 13 months, signed subcontracts and than produced fake documents with “swollen” costs.

The picture is getting even worse if we add that according to the experts’ estimations by now Iraq has lost $90 billion because of illegal exports of oil and oil products.

Besides that, annually the country wastes about 600 million cubic meters of gas and of 1041 oil wells only 441 are being exploited. The country does not use its export potential estimated at 4.2 million barrels even by half.

Over the last seven years of the Iraqi democracy not a single oil processing plant has been built in the country despite the proposals from foreign companies.

According to the information of the control department of US Congress, of 2 million barrels of oil produced in Iraq daily from 100,000 to 300,000 barrels remained unregistered which is from $5 million to $15 million in monetary terms.

On comparing the economic state of Iraq under Saddam Hussein and now we can conclude that the export of the US democracy turned out to be destructive for the Iraqi economy. The Western democratic models do not work in the Arabic world.