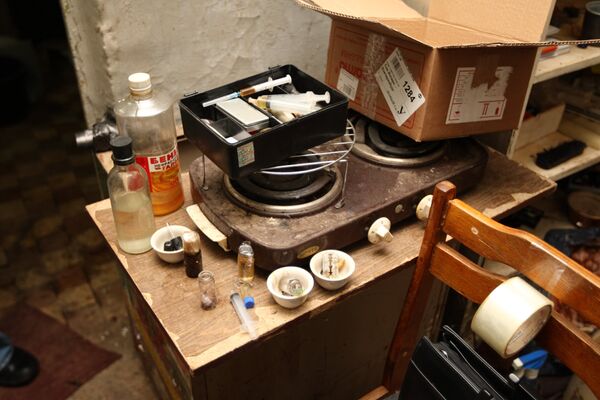 At the beginning of the 20th century, U.S. scientists attempted to derive new morphine-based medicines with a strong analgesic effect that do not cause chemical dependence. As a result, scientists settled on several pharmacologically active substances, of which desomorphine and methadone were the most promising.

Animal trials of desomorphine showed that, by comparison with morphine, its analgesic effect was stronger and more rapid. It was later found, however, that the effect lasted on average about four hours, causing a quicker addiction. For this very reason, desomorphine has not found a practical application as an analgesic.

Desomorphine was briefly used abroad as a postoperative analgesic. It was available in the form of hydrobromic acid salt under the name of Permonid, produced by Roche.

Recent years have seen a renewed interest in desomorphine as a narcotic. Its effect is very similar to that of heroin. Both substances cause the same strong dependence and lead to an irreversible destruction of the organism.

Desomorphine first appeared on the Russian market in 2003. Recently, there has been an epidemiological increase in the number of drug addicts, mostly young people, using this unconventional drug.

The main reason for desomorphine’s appearance and spread is the simplicity and accessibility of its preparation. Due to the relatively cheap, quick, and very crude preparation equipment needed in home industry, the drug is fairly inexpensive. Desomorphine is not available as a medicine. It is derived from a haphazard mix of codeine-based medications and household chemicals. In Russia, most codeine-based medicines are available without prescription, making it quite easy to produce desomorphine at home.

The result is a "dirty", and consequently a highly dangerous, drug. A number of chemical substances are used in the homemade production of desomorphine. These include industrial acids, alkalis, and organic solvents (petrol, etc.). In most cases industrial quality chemicals are used, rather than purified forms intended for consumption.

This mixture of compounds, used in the process of making desomorphine, and not filtered out later, often contains high concentrations of iodine, which disrupts the endocrine system and causes muscular disorders; phosphorus, which attacks bone tissue; and dangerous admixtures of heavy metals such as iron, zinc, lead and antimony, which cause disorders of the nervous system, mineral imbalances, and inflammation of the liver and kidneys.

Drug addiction often follows the first dose. Desomorphine users suffer from an acute deterioration in their general health, including a weakened immune system and failing liver. Their circulation is so effected that their limbs gradually wither and die. Non-healing ulcers appear on the body and a person literally rots alive. Veins located near the injection sites "burn up." Those addicted to desomorphine do not survive for more than a year (for comparison: even heroin addicts have a survival rate of up to five years).

In addition, hepatitis C is reported in 33% of desomorphine addicts, according to health authorities.

Due to the chemical properties of desomorphine, those addicted to the drug never go into remission. Half the patients go back to taking the drug or start taking codeine pills.

Previously, desomorphine addicts were largely former heroin addicts. Recently, there have been more cases of drug addiction beginning with desomorphine.

The reference is based on open source materials