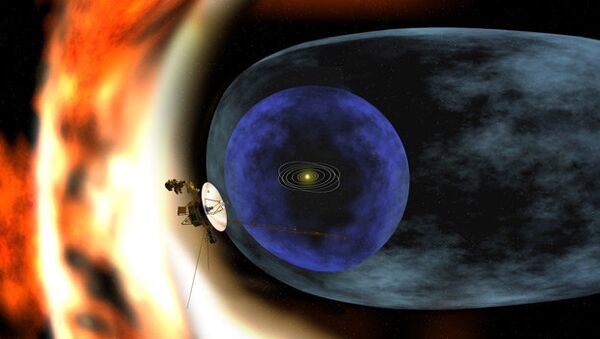 © NASA
Subscribe
NASA's Voyager 2 spacecraft has resumed sending science data from deep space after engineers fixed a bug that had garbled the information it was sending back to Earth, a leading project scientist said on Monday.

NASA's Voyager 2 spacecraft has resumed sending science data from deep space after engineers fixed a bug that had garbled the information it was sending back to Earth, a leading project scientist said on Monday.

The science data coming from Voyager 2 had been unintelligible since April, but last week engineers at NASA's Jet Propulsion Laboratory in Pasadena, California figured out what was causing the problem - one bit in the memory of the computer that formats the data to transmit it to Earth had flipped from a zero to a one - and reset the system.

After three days of monitoring the engineering data to ensure the fix was successful, the command to restart science data transmission was sent to the spacecraft on Saturday. It takes nearly 13 hours for a radio signal traveling at the speed of light to reach the spacecraft from Earth, and another 13 hours to receive an answer, so scientists began receiving the science data on Sunday.

However, the data gathered while the system was not working has been lost.

"During the last month, the spacecraft was transmitting engineering data, but there is no capability for on-board storage of the 160 bps cruise science data," Stone said.

Stone said that the scientists would not know whether there was a transient event even when they analyzed the Voyager 2 data, but they would be able to see if there was a significant change compared with before the data outage.

"However, there has been little solar activity over the last several years, so it is unlikely there were any significant transients," he added.

The Voyager 2 spacecraft is a twin of Voyager 1. It has been operating through the Solar System since August 20, 1977.

First, Voyager 2 was exploring Jupiter and Saturn, later it flew to explore Uranus and Neptune and then it headed into interstellar space.