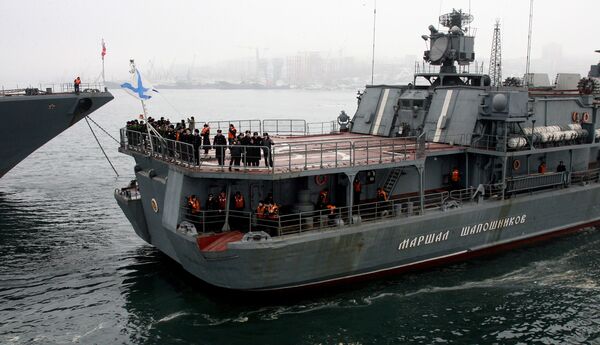 © RIA Novosti . Vitaliy Ankov
/
Go to the mediabank
Subscribe
International
India
Africa
The operation to release a Russian vessel seized by Somali pirates on Wednesday lasted just 22 minutes, the commander of the Russian naval task force in the Gulf of Aden said Thursday.

The operation to release a Russian vessel seized by Somali pirates on Wednesday lasted just 22 minutes, the commander of the Russian naval task force in the Gulf of Aden said Thursday.

Commandos from the large anti-submarine warship Marshal Shaposhnikov freed the Moscow University tanker, hijacked on Wednesday, in an operation on Thursday.

"The pirates were taken by surprise as they did not expect such decisive action on our part," captain 1st rank Ildar Akhmerov told Russian journalists.

"The practice in the Gulf of Aden shows that if pirates have made it onto the board of the tanker, it is too hard and almost impossible to get them out of there," he added.

Akhmerov also said that the tanker's crew had been constantly pressuring the pirates, telling them to leave the vessel and surrender and that they would not get a ransom.

"We will have to act as our forefathers did when they met pirates", the Russian president said. "Of course, we will fight pirates with the full force of the naval law."

The president did not specify how exactly the pirates should be punished.

Medvedev praised the Defense Ministry for freeing the Russian tanker Moscow University from pirates and requested that all servicemen who took part in the operation be put forward for awards.

"Fine fellows, well done. I ask you to prepare awards for all our servicemen who played a hand in accurately, professionally and quickly freeing the tanker," Medvedev told the Russian defense minister.

Russian commandos from the large anti-submarine warship Marshal Shaposhnikov accessed the tanker by helicopter, abseiled on board and freed the crewmembers who had locked themselves in a safe room after disabling the ship.

"As a result of the operation, it can be said that the Pacific fleet demonstrated a high level of training and professionalism during the assault and when they freed the crew," a Navy source said.

"I want to express my gratitude to the Russian navy forces as well as the crisis staff," Tulchinskaya said

She declined to comment further and did not specify whether she had managed to talk to her husband after the incident.

A high-ranking official from the maritime coalition forces said Navy forces made the decision to free the Moscow University tanker as they were aware the sailors had taken cover in an area inaccessible to the pirates on board the ship.

"Around 3.00 a.m. Moscow time [23:00 Wednesday GMT], the warship sailed out toward the tanker's location to assess the situation. Then the decision on conducting a special operation was taken," the official said, adding the pirates had been detained. He also said the Navy forces had not suffered any casualties.

According to the official, the commandos from the Marshal Shaposhnikov detained 10 pirates and killed one during the release of the tanker.

"During the reconnaissance preceding the assault operation, the Russian commandos simultaneously used helicopters and speedboats while special forces covertly approached the tanker," the official said, adding that after a short shootout the pirates were detained and put under custodial guard in one of the tanker's compartments.

"During the Shaposhnikov's special operation, the pirates on board the Moscow University tanker opened fire using small arms. One of them was shot during return fire," the military official said. He also said no sailors were injured.

A Russian Investigative Committee spokesman initially said on Thursday that all the detained pirates involved in hijacking the tanker would be sent to Moscow for proceedings, but later said the issue has not been discussed yet.

Some media carried reports that the pirates had been released, but a representative of the Russian naval task force in the Gulf of Aden told RIA Novosti by the phone that "no one has let them go."

"After investigative activities are completed, the decision will be made on where the arrested pirates will be sent. This issue is being resolved now; there are several variants," he said.

The Russian tanker with 23 Russian crewmembers and 86,000 tons of oil was hijacked by Somali pirates on Wednesday around 8.00 a.m. Moscow time [04:00 GMT], when it was on its way from the Red Sea to China. The pirates attacked the Russian vessel 350 miles east of the Gulf of Aden.

The captain of the tanker was able to get in touch with the Russian warship by phone and called for help.

A Russian Pacific Fleet task force comprising the Marshal Shaposhnikov, the MB-37 salvage tug and the Pechenga tanker arrived in the Gulf of Aden on March 29 to join the anti-piracy mission in the pirate-infested region.

The Marshal Shaposhnikov has two helicopters and an infantry unit on board.

Meanwhile, the company that owns the vessel, Novoship, said the crew feel well and are ready to continue their journey. The company earlier said the tanker was heading to China.

Shipping experts are divided on the reasons the Moscow University tanker followed the shortest but most dangerous route.

The Russian daily Gazeta quoted the Maritime Bulletin magazine's editor-in-chief, Mikhail Voitenko, as saying he received a letter from an experienced captain who has sailed through the Gulf of Aden. Citing the unnamed captain's letter, Voitenko said only high-speed cargo vessels were able to follow such a dangerous route.

Voitenko told Gazeta the only reason why the Moscow University tanker chose the shortest way was a desire to save fuel. He did not elaborate whether it was the captain "not giving a damn" or the tanker's owner, Novorossiysk Shipping Company (Novoship), that "went totally whacko" and decided to risk people's lives in order to save fuel.

Gazeta quoted Voitenko as saying he did not believe the official statements by the Russian naval command and ship owners. According to him, the information announced earlier by EU NAVFOR Rear Admiral Jan Tornqvist that the tanker's sailors were able to barricade themselves in the radio room was far from the truth.

The paper quoted Voitenko as saying it would be the truth only "if this was set up in advance."

Russia's envoy to the United Nations Vitaly Churkin said Thursday that UN members had congratulated Russia on successfully freeing the tanker from pirates.