Medvedev urges UN to protect memory of fighters against Nazism 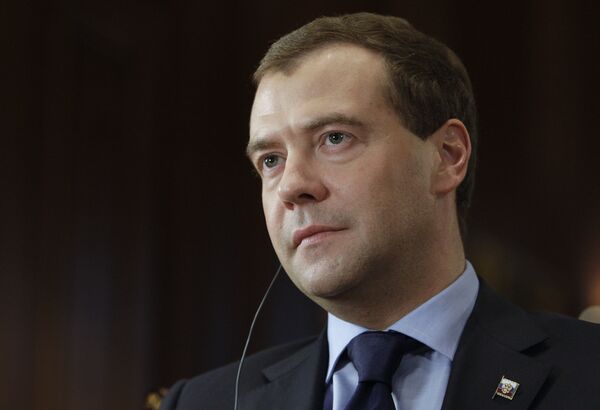 All UN member states should counter attempts to distort the history of World War Two and to profane the memory of those who fought Nazism, the Russian president said in a message to the UN General Assembly.

All UN member states should counter attempts to distort the history of World War Two and to profane the memory of those who fought Nazism, the Russian president said in a message to the UN General Assembly.

Russia's envoy to the UN Vitaly Churkin read out Dmitry Medvedev's message to the Assembly session.

"The victory [in WWII] was reached at the cost of a tremendous toll. We should not forget this and should give a tough repulse to cynical, politically-motivated attempts to rewrite history and revise the conclusions and rulings of the Nuremberg Tribunal," Medvedev's message says.

"Our common duty before the liberator warriors and future generations is to defend the truth of the war and the significance of the victory, to resolutely counter those who profane the glory of the heroes who routed fascism," the statement also said.

The war continues to be a contentious issue in Russia's relations with the Baltic states of Estonia and Latvia, over their perceived glorification of Nazi collaborators. Parades in honor of Waffen-SS veterans, involving veterans from the Latvian Legion and the 20th Estonian SS Division and their supporters, are held annually in the two Baltic states.

Another former Soviet republic, Ukraine, holds numerous events to honor the Ukrainian Insurgent Army that fought against the Soviets during WWII.

Medvedev also called for strengthening the potential of the United Nations.

"Today, while remembering the events of that cruel war, we must be aware what monstrous consequences are entailed by violence, racial and religious intolerance. In this connection the task to strengthen the UN potential acquires a special significance," his message said.

The Russian president also thanked all the foreign leaders and other guests who had agreed to come to Russia for Victory Day celebrations on May 9.