Iranian leopards make themselves at home in Russia's Sochi 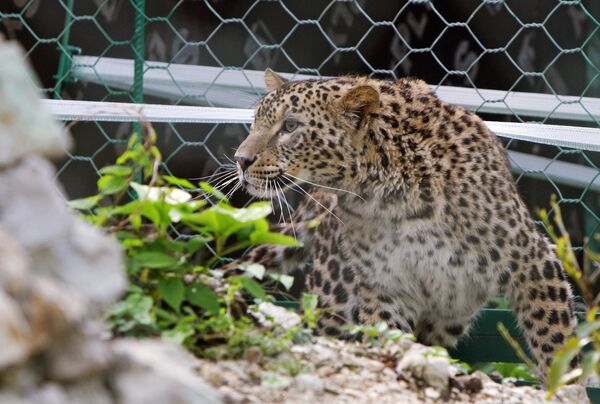 Russian Prime Minister Vladimir Putin helped to release one of the two female Anatolian leopards into an open-air cage on May 3. The second leopard had to be released separately because it fell ill.

The two leopards will take part in a project to re-introduce the rare species of leopard to the North Caucasus.

"Both female Anatolian leopards are eating well. They are fed live rabbits, liver, eggs and milk," Semenov said. "The way they hunt the rabbits shows that, if they manage to breed, the females will be able to teach their young how to hunt."

The older leopard is two years old and very strong and the other is very young. Neither have been given names yet.

The national park is also home to two male leopards, General and Alous. Putin released them into open-air cages in September 2009. The park is part of a project to preserve the environment around surrounding facilities being built for the 2014 Sochi Olympic Games.

Putin called for the conservation of endangered animals, including leopards, in Russia in December 2009 during an annual televised question-and-answer session.

The prime minister is taking an active role in programs for the study and preservation of endangered species, including the Amur tiger and the white whale.

According to the World Wildlife Fund, there are only 870 - 1300 Anatolian leopards left in the world. In Russia, the Anatolian leopard is only found in some remote areas of the Eastern Caucasus.