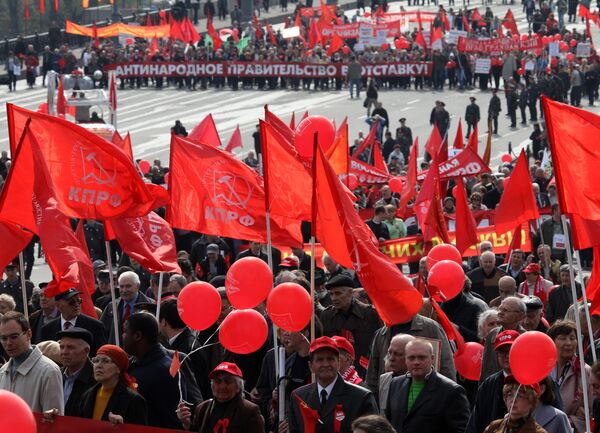 The Communists used their annual demonstration of workers' solidarity to protest the inclusion of Western troops - from the United States, Britain and France - in the May 9 Victory Day parade.

"NATO on Red Square - Defeat!" and "NATO - get off Red Square!" proclaimed the demonstrators.

This year's Victory Day parade, marking the 65th anniversary of the defeat of Nazi Germany, is the first time Western militaries have taken part in the annual march across Red Square.

Several other political parties and opposition groups also held demonstrations in the capital, the largest being the march of the Russian Federation of Trades Unions along Tverskaya Street, held jointly with the pro-Kremlin United Russia party.

At the rally afterwards, Moscow Mayor Yury Luzhkov said the city government would work to ensure that employment in the city is the highest in the country.

"We in Moscow jointly achieved a unique result - unemployment here is below 1%," he said.

Luzhkov then condemned the federal government for the level of funding for the construction of the Moscow Metro in the 2010 state budget.

"The development of public transport is a national task," he said, adding that whatever happened, the city government and Moscow City Duma would resolve any issues surrounding subway construction.