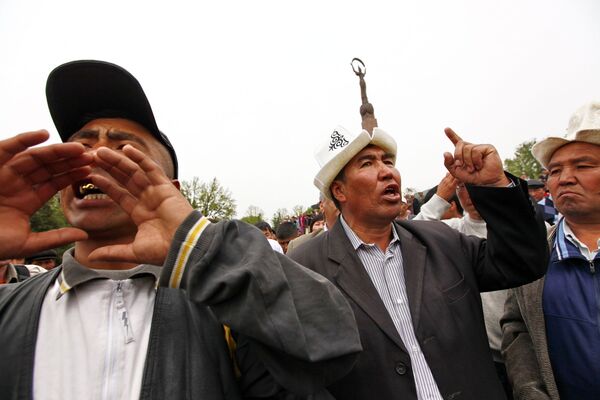 © RIA Novosti . Andrey Stenin
/
Go to the photo bank
Subscribe
More protests broke out in Kyrgyzstan on Saturday, ten days after the outbreak of violent uprisings that left at least 84 dead and around 1600 injured.

More protests broke out in Kyrgyzstan on Saturday, ten days after the outbreak of violent uprisings that left at least 84 dead and around 1600 injured.

Two rallies were held on Saturday on the main square of the southern Kyrgyz town of Jalal-Abad, a stronghold of ousted President Kurmanbek Bakiyev.

One rally involved local police officers, who were campaigning for the protection of their rights, and the other was held by supporters of the county's former defense minister, Bakit Kaliyev, who has been arrested by the country's interim government.

The protestors of the Kaliyev rally turned violent when interim Interior Minister Bolot Sherniyazov arrived in the region to lead an operation into the arrest of the deposed Kyrgyz President's brother Zhanyshbek Bakiyev.

When Sherniyazov arrived at the central square, he was attacked and stones were thrown at his car. He immediately withdrew from the area.

The protesters also broke into an administrative building on the square. A RIA Novosti reporter said there were about 300 supporters of the former president involved.

Uprisings broke out in Kyrgyzstan on April 6, spreading across the country and leaving at least 84 dead and around 1,600 injured. President Bakiyev was deposed and forced to flee the capital and later the country. An interim government was formed under Roza Otumbayeva.

Kaliyev, who was one of the deposed president's closest associates, was arrested in Jalal-Abad on Thursday. The minister was accused of shooting civilians during the opposition rally on April 7 at the Government House in the capital of the ex-Soviet Central Asian republic, Bishkek.

The deposed president has taken refuge in Kazakhstan but the new Kyrgyz authorities said they will initiate an international investigation into the alleged crimes committed by him. A special operation has begun in an attempt to find the former president's brother, and ex-security services chief.