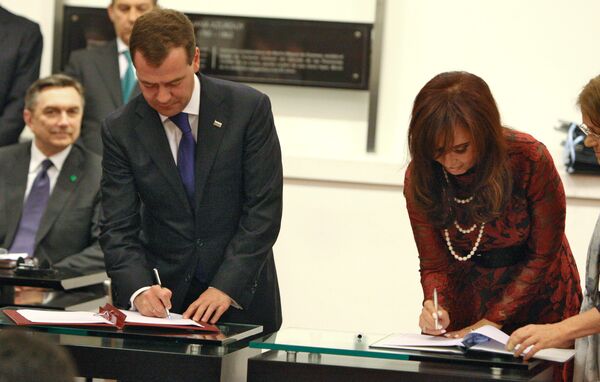 Medvedev held talks with his Argentinean counterpart Cristina Fernandez de Kirchner during his visit, the first top-level official visit in the history of diplomatic relations between the two countries.

Documents signed in Buenos Aires focused among others on cooperation in the spheres of nuclear energy, transportation, forestry, culture, education and sports.

Russia's state-run nuclear power corporation Rosatom and Argentina's Ministry of Federal Planning signed a protocol on cooperation in the sphere of peaceful use of nuclear energy.

Medvedev said during a joint news conference with Kirchner that the agreement stipulated a several-billion-dollar investment in Argentina's nuclear energy sector.

"If we are talking about, for example, the atomic energy sphere, the arrival of the Russian company Rosatom in the Argentinean market... will lead to a several-billion-dollar investment intended to be spent on the creation of... nuclear reactors, as well as on the development of infrastructure," the Russian president said.

"I stress that only this project is estimated at several billion dollars. But there are other projects as well," he said.

The Latin American state has two operational nuclear power plants, the Atucha I NPP near Buenos Aires and the Embalse NPP in the central Cordoba province. The third facility, Atucha II, is under construction.

Kirchner said there were plans to build another NPP, the Atucha III.

The goal of Glonass project was to have global coverage by 1991. With the collapse of the Russian economy in the 1990s, work on the project was suspended. Beginning in 2001, Russia committed to restoring the Glonass system. The number of satellites increased from six to 23 over the last nine years, with only 21 of them operational.

Russia and Argentina have also signed a deal on the purchase of two Russia-produced Mi-171E helicopters intended for the Latin American state's Defense Ministry.