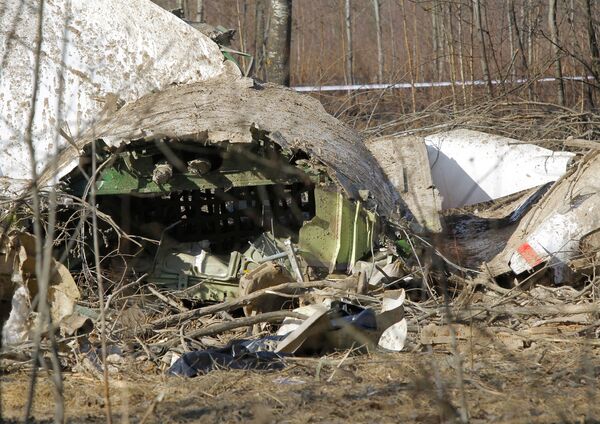 © RIA Novosti . Ilya Pitalev
/
Go to the photo bank
Subscribe
The crew of the Polish president's plane, which crashed in Russia last Saturday killing President Lech Kaczynski and other top officials, attempted to land without permission, an air traffic controller said on Tuesday.

The crew of the Polish president's plane, which crashed in Russia last Saturday killing President Lech Kaczynski and other top officials, attempted to land without permission, an air traffic controller said on Tuesday.

A Soviet-made Tu-154 plane was carrying a delegation of Poland's top public figures to pay tribute to some 20,000 Polish officers executed by Soviet secret police in 1940. It hit the top of trees while attempting to land at the Severny military airport near the western Russian city of Smolensk in thick fog. All 96 people on board were killed in the crash.

Col. (Ret.) Anatoly Muravyov, the air traffic controller who was guiding the plane during the landing, told the Komsomolskaya Pravda Russian daily that the crew "did not listen" to recommendations to divert to another airport.

"The head of the traffic control group warned of poor weather conditions, but the crew went ahead with the landing without permission. And [they] also made their landing approach without permission," Muravyov said.

"The [control tower] head said three times to execute a flyby procedure. When the crew did not listen, the control tower could only continue to guide the plane and watch it. It was the only landing approach, the plane crashed at once," he added.

Muravyov said the controllers were unable to give a direct command to divert because "we have no rights to give orders to civilian pilots."

"Conversations with the crew were in Russian and sometimes in bad English. It hampered understanding," he said, adding that the fatal crash was caused by a combination of factors.

The traffic controller said the plane's crew did not follow the standard procedure of informing the control tower of all the performed maneuvers and altitude, possibly because of a language barrier.

"Weather conditions, probably a crew mistake, loss of altitude and the pilot's ambition to land the plane by all means. I think this ambition was due to the fact that there were such high-ranking people onboard... Because of... this false idea that diverting to another airport is a shame the pilot took so many people to Heaven with him," Muravyov said.

The Russian traffic controllers successfully guided two planes prior to the ill-fated Tu-154 requested landing. The first, a Yak-40, landed successfully in the Severny airfield, the second, an Il-76 was diverted to Vnukovo Airport in Moscow.