Israeli attack on Iran might lead to nuclear conflict - Medvedev 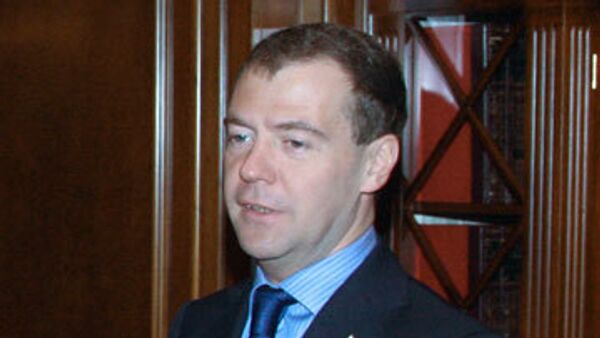 Russian President Dmitry Medvedev has warned Israel against a military attack on Iran, saying it might lead to nuclear war and global disaster

Russian President Dmitry Medvedev has warned Israel against a military attack on Iran, saying it might lead to nuclear war and global disaster.

The United States and Israel have refused to rule out military action against Iran if diplomacy fails to resolve the dispute over Tehran's nuclear program.

In an interview with the ABC News, the Russian leader said an attack on Iran would be "the worst possible scenario" in the Middle East, because "everyone is so close over there that nobody would be unaffected."

"And if conflict of that kind happens, and a strike is performed, then you can expect anything, including use of nuclear weapons. And nuclear strikes in the Middle East, this means a global catastrophe. Many deaths," Medvedev said.

He added that he was uncertain on whether Israel would decide to carry out an airstrike against Iran.

"The Israelis are directing their own policy. I do have a good relationship with the president and prime minister of Israel. But those are independent people. And I would say that on many questions they are defending stubborn positions. Very tough," he said.

"The US has seen the proof of that lately," he added, in a reference to the issue of the Israeli settlement construction in East Jerusalem,

Hopes for a solution to the Palestinian-Israeli conflict were dealt a serious blow by Israel's recent decision to build 1,600 houses for Jewish families in East Jerusalem, considered occupied territory under international law. East Jerusalem is also claimed by the Palestinians as the capital of their future state.