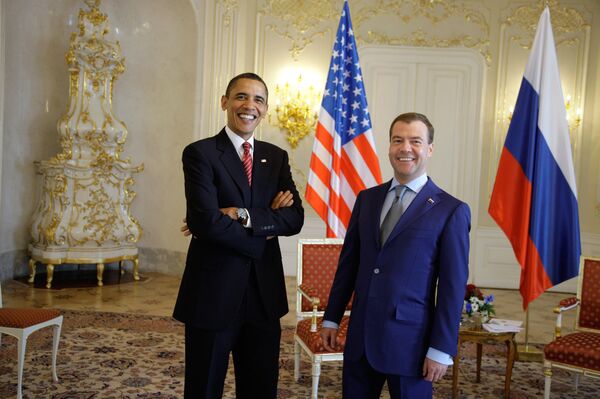 On April 8, 2010, Presidents Barack Obama and Dmitry Medvedev signed the Treaty Between the United States of America and the Russian Federation on Measures for the Further Reduction and Limitation of Strategic Offensive Arms.

On April 8, 2010, Presidents Barack Obama and Dmitry Medvedev signed the Treaty Between the United States of America and the Russian Federation on Measures for the Further Reduction and Limitation of Strategic Offensive Arms.

The new document replaces the 1991 Soviet-U.S. START-I agreement, which expired on December 5, 2009, 15 years after its entry into force, and the May 2002 Russian-U.S. Strategic Offensive Reductions Treaty (SORT).

A study of the treaty's text makes it possible to single out the following aspects determining the new configuration of the strategic nuclear balance:

1. Unlike the START-I agreement, the new document stipulates no restrictions on the area and number of basing areas of land-mobile ICBM systems of the RT-2PM Topol (SS-25 Sickle), RT-2UTTKh Topol-M (SS-27 Sickle B) and RS-24 Yars (SS-X-29) class.

2. The Treaty sets tough limits on non-deployed launchers of ICBMs, non-deployed ICBMs and non-deployed SLBMs, and seriously reduces overall delivery vehicle ceilings. This largely evens out the difference between U.S. and Russian capabilities for maintaining their respective nuclear potentials.

3. The Treaty sets no limits on the development of U.S. missile defense systems but notes the link between defensive and offensive arms.

Under a special statement signed together with the Treaty, Russia reserves the right to exit from the treaty in case it feels threatened by the development of U.S. missile defense systems. The parties have also agreed that existing missile defense systems do not undermine the effectiveness of strategic offensive arms.

It should also be noted that the lack of restrictions on basing areas of land-mobile ICBM systems virtually rules out the creation of an effective missile defense system capable of intercepting such ICBMs in the foreseeable future.

4. The parties are free to determine the structure of their respective nuclear triads comprising aerial, naval and ground-based delivery vehicles. In this situation, Russia is free to resume construction of ICBM trains.

5. The Treaty sets no limits on the deployment of ground-based ICBMs with multiple independently targetable re-entry vehicles (MIRVs). Consequently, Russia will be able to retain its ICBMs of the RS-20 Voyevoda (SS-18 Satan) and RS-18 (SS-19 Stiletto) type and to develop new types of MIRVed ICBMs.

7. The 1,550 warhead ceiling does not mean that each party will have the same number of nuclear warheads. Under the Treaty, one nuclear warhead will be counted for each deployed heavy bomber which can carry 12-24 missiles or bombs, depending on its type. Consequently, Russia will retain 2,100 warheads and the United States, which has more heavy bombers, will have about 2,400. This gap will be reduced as the United States decommissions B-1B bombers serving with its strategic nuclear forces and converts them into conventional bombers, which are unable to launch nuclear warheads unless subjected to lengthy refitting.

The new START Treaty is organized in three tiers of increasing level of detail. The first tier is the Treaty text itself. The second tier consists of a Protocol to the Treaty, which contains additional rights and obligations associated with the Treaty's provisions. The basic rights and obligations are contained in these two documents. The third tier consists of Technical Annexes to the Protocol.

These documents define the Treaty's terms and stipulate new verification procedures for monitoring compliance with the Treaty. Although the voluminous Protocol has to be studied in great detail, the first impression is that Russian and U.S. negotiators have done a good job and have specified mutual positions to the greatest possible extent in order to avoid any uncertainty.

In conclusion, one can agree that both the United States and Russia have benefited from signing the Treaty, which can serve as an example for other nuclear powers now expected to join Russian-U.S. agreements.