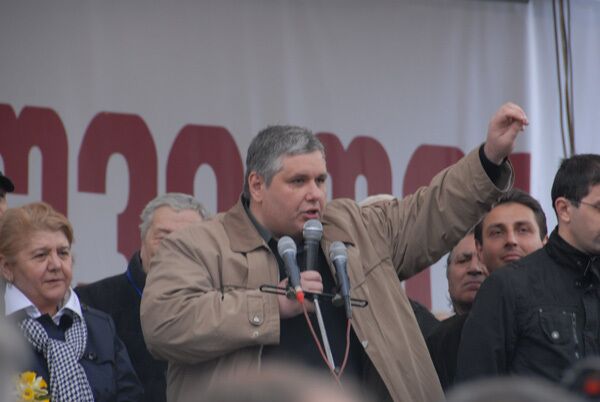 Georgian opposition leaders warned the authorities on Thursday that the country could see a Kyrgyz scenario if opposition activists continue to be arrested.

Georgian opposition leaders warned the authorities on Thursday that the country could see a Kyrgyz scenario if opposition activists continue to be arrested.

Earlier in the day, police detained eight protesters for blocking a road in the capital, Tbilisi.

The warning came from Zurab Nogaideli, former prime minister and current leader of the For a Fair Georgia public movement; and Koba Davitashvili, the leader of the People's Party.

"A revolution took place in Kyrgyzstan following the arrest of political [opposition] leaders. If [President Mikheil] Saakashvili or [Interior Minister Vano] Merabishvili dare touch any representative of the opposition again, this will be followed by what happened in Kyrgyzstan, and it will be the end of their rule," Davitashvili said.

At least 75 people have been killed and more than 1,400 injured during public protests in Kyrgyzstan. The opposition formed a provisional government and claimed it had the support of the country's armed forces, border guards and police.

The protests began in the northwestern Kyrgyz town of Talas on Tuesday and spread to other regions of the country, including Bishkek, on Wednesday.