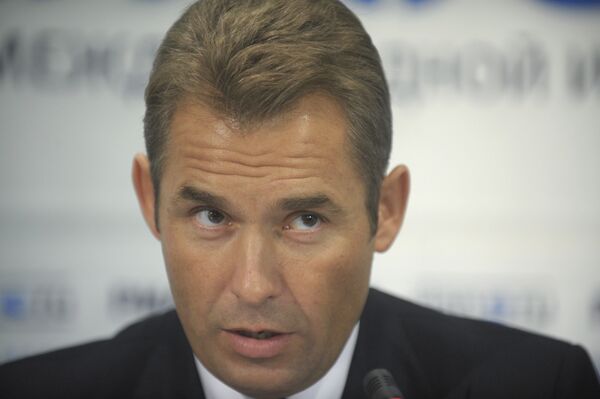 © RIA Novosti . Grigory Sisoev
/
Go to the photo bank
Subscribe
An 8-year boy adopted by an American couple is in the care of the Russian authorities after arriving in Moscow having apparently been abandoned by his parents, Russia's ombudsman for children's rights said on Thursday.

An 8-year boy adopted by an American couple is in the care of the Russian authorities after arriving in Moscow having apparently been abandoned by his parents, Russia's ombudsman for children's rights said on Thursday.

"Today a message arrived saying that an 8-year boy, who does not speak Russian but understands Russian, has flown in from America. He had a note in which his adoptive parents said they had abandoned him and asked that the boy be taken back," Pavel Astakhov told RIA Novosti.

The boy was at a central Moscow police station, but an ambulance had been called to take him to a hospital for a medical examination. Astakhov said he would investigate the case.

The issue of U.S. couples adopting Russian children has become controversial in Russia in recent years, following the deaths of two children in separate incidents in the U.S. state of Virginia.

In 2006, Peggy Sue Hilt was sentenced to 25 years in prison for beating to death a 2-year-old girl from Siberia she had adopted.

Two years later, a 21-month-old boy died of heatstroke after his adoptive father left him in his car for nine hours in the hot sun.

Miles Harrison, 49, was acquitted of involuntary manslaughter of Chase after a court accepted that he had forgotten the boy, born Dmitry Yakovlev, was in the car and driven to his office without dropping his son at daycare.