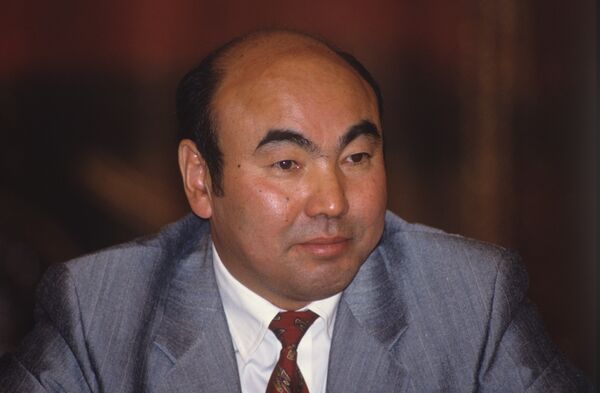 Protests in Kyrgyzstan will not lead to a civil war and the situation in the Central Asian state may normalize within a few days, the country's first post-Soviet president, Askar Akayev, said on Thursday.

Protests in Kyrgyzstan will not lead to a civil war and the situation in the Central Asian state may normalize within a few days, the country's first post-Soviet president, Askar Akayev, said on Thursday.

Akayev, 65, was overthrown by Kurmanbek Bakiyev who came to power in 2005 during the Tulip Revolution. Akayev fled the country with his family and took refuge in Russia.

Like his predecessor, Bakiyev, 60, was forced to flee the Kyrgyz capital, Bishkek, where opposition riots have left at least 74 people dead and more than 500 injured.

Major political unrest started in Kyrgyzstan last month when the opposition forces accused the government of tightening its grip on power while failing to bring stability and economic growth.

The situation escalated on Tuesday, when several opposition leaders were arrested after police and activists clashed in the northwestern town of Talas, and the unrest spread to other parts of the country on Wednesday.

The provisional government, formed by the opposition, said on Thursday it had dismissed the parliament and took power over from President Bakiyev and his government.

The opposition, which now controls four out of Kyrgyzstan's seven regions and whose power base is in the north of the country, said Bakiyev is trying to organize resistance in his power base in the south, where he has traditional support.

Meanwhile, Akayev said that the south is not likely to back Bakiyev, whose rule has been marred by economic problems, high-profile murders, prison riots and disputes over the control of lucrative businesses.

"I think there will be no civil war. The south will not back Bakiyev, I do not think there is any resistance between the south and the north as the protest mood is also strong in the south," Akayev said in an interview with RIA Novosti.

"He [Bakiyev] had many brothers and they also controlled the south, and the south has also had enough of the Bakiyev family," Akayev said adding that he was sure that "this is the end of Bakiyev's regime." Bakiyev was also suspected of preparing his son, Maxim, to inherit power in the country.

Akayev also said his successor, Bakiyev, could have the same fate as the former Soviet dictator of Romania Nicolae Ceausescu who was overthrown in a military coup in 1989 and executed.

"Bakiyev has himself come to such an end. His fate is like the fate of the Romanian dictator. That is why people today are so fiercely against him. He is waiting for the sad fate of Ceausescu," he said.

Akayev also said Bakiyev is unlikely to receive political asylum in another country.

"No one will take him [Bakiyev] because he was not able to form friendly relations with any of the neighboring countries," Akayev said.