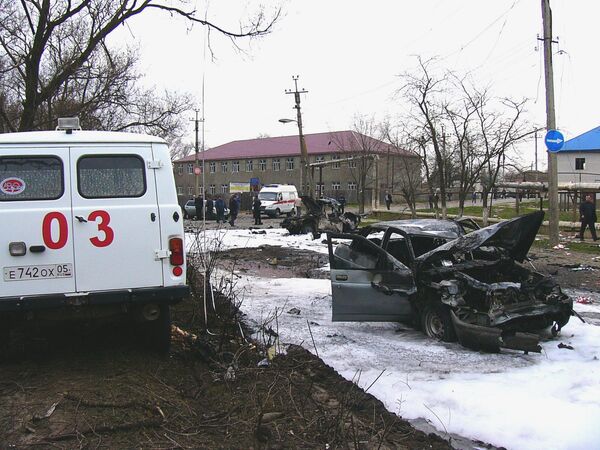 Police defused a bomb found in a graveyard near the Dagestani town of Kizlyar on Wednesday, the same day it was hit by two suicide attacks

Police defused a bomb found in a graveyard near the Dagestani town of Kizlyar on Wednesday, the same day it was hit by two suicide attacks, a law enforcement source said on Friday.

The bomb was found on the outskirts of the village of Oguzer near Kizlyar, where 12 people, nine of them policemen, were killed in two suicide bombings on Wednesday.

"At 20:00 [16:00 GMT] on the outskirts of Oguzer in the Kizlyar region, law enforcement officers found ... a homemade bomb made up of a 12-liter bucket filled with a mixture of ammonium nitrate and aluminum powder, as well as destructive elements such as metal nuts and screws," the source told RIA Novosti.

President Dmitry Medvedev said the bombings were all links in the same chain, while Prime Minister Vladimir Putin said a single terrorist group carried out the attacks.

Chechen militant leader Doku Umarov claimed responsibility on Wednesday for the metro attacks, saying in a video message they were revenge for a special operation carried out by federal security forces on February 11, 2010, when 18 militants and four civilians were killed in Ingushetia. He threatened further attacks.