Medvedev vows not to allow terrorists to destabilize Russia 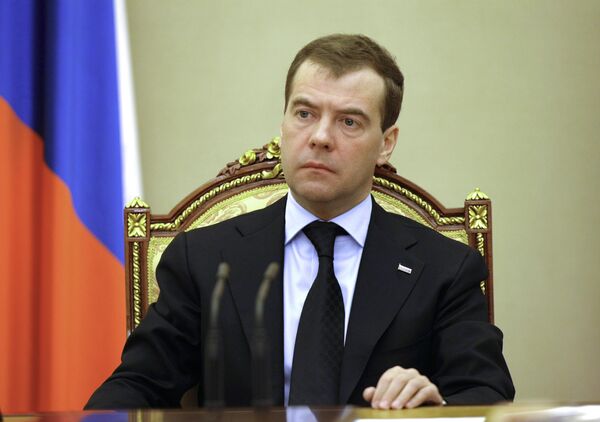 © POOL
/
Go to the photo bank
Subscribe
Terrorists will not be allowed to destabilize the situation in Russia, President Dmitry Medvedev said on Wednesday following two double bombings in Dagestan and Moscow.

Terrorists will not be allowed to destabilize the situation in Russia, President Dmitry Medvedev said on Wednesday following two double bombings in Dagestan and Moscow.

"The terrorists' goal is to destabilize the situation in the country, destroy civil society and spark fear and panic among the population," Medvedev said. "We will not allow this."

"As for the criminals, all of them will be found and eliminated," he said.

On Wednesday, twin blasts killed as many as 12 people and injured 29 in the town of Kizlyar in Russia's North Caucasus republic of Dagestan, while at least 39 people were killed on Monday in two attacks on the Moscow metro.

Both Medvedev and Russian Prime Minister Vladimir Putin said on Wednesday a single terrorist group may be behind the bombings in Moscow and Dagestan.

The premier ordered that the relatives of those killed and injured in the Kizlyar blasts receive the same financial aid as relatives of victims of the Moscow bombings.

Medvedev pledged on Wednesday to continue efforts to improve the situation.

"All social and economic programs in the North Caucasus should be continued irrespective of anything else," he said during a meeting of the Russian Security Council in his Gorki residence outside Moscow.

The Kremlin said on Wednesday that Medvedev had signed a decree ordering the government to strengthen security on transportation.

The document provides that special security equipment should be set up on the "most vulnerable" transport infrastructure by March 31, 2011, while an advanced security system should be introduced in the Moscow metro by January 1, 2014.