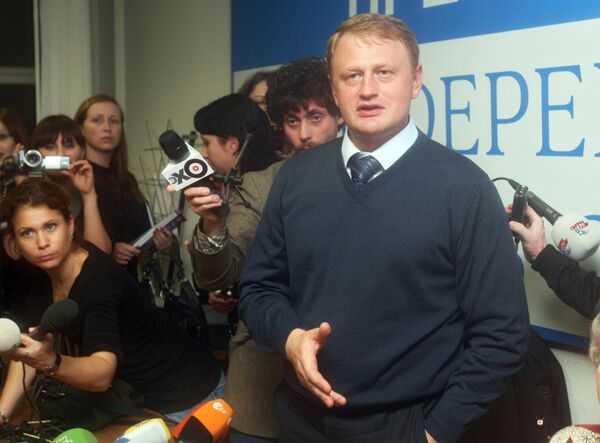 © RIA Novosti . Ilya Pitalev
/
Go to the photo bank
Subscribe
A former Russian police officer who posted two videos on the web calling for a nationwide crackdown on police corruption told a Moscow tabloid on Thursday another video is on the way.

A former Russian police officer who posted two videos on the web calling for a nationwide crackdown on police corruption told a Moscow tabloid on Thursday another video is on the way.

Alexei Dymovsky, a former police major from Russia's Black Sea port of Novorossiysk became widely known after he posted two videos on YouTube last fall, in which he made allegations of corruption and illegal activities among his chiefs and fellow officers, saying ordinary staff were often treated "like cattle" and forced to "jail innocent people" to meet monthly targets.

Dymovsky, who was fired shortly after posting his claims, has been charged with fraud and abuse of office, which carries a maximum of 10 years in prison. He was under arrest since January 22 but was released on March 7 on his own recognizance.

"We will fight till the end. What was happening in Novorossiysk's Primorskiy Court can only be described with the word 'inquisition.' I had asked to have a closed session so that I could present secret documents which prove I am right. But Federal Judge Raisa Konstantinova rejected my requests," Dymovsky said in an interview with Moskovsky Komsomolets, adding he was "sorry" he had not posted the videos earlier.

"I will post an 'apology' on YouTube on the Day of Cosmonauts (April 12) to [Interior Minister] Rashid Nurgaliyev and [Russian Prime Minister] Vladimir Putin. But I am afraid they will not like it. Then I will come out with concrete accusations of corruption."

Dymovsky said his family was under pressure from security forces even as the authorities were "knitting" another criminal case against him, this time on charges of drug dealing, as part of a larger drive to silence overly outspoken insiders, people who are involved in the government mechanism.

This and other scandals prompted President Dmitry Medvedev in December 2009 to order a large-scale reform of the Interior Ministry, trimming police numbers and raising salaries in an effort to reduce corruption.

The reputation of the Russian police force has declined dramatically in recent years. In just over 18 months, Russian police officers have been convicted or charged with burning a suspect to death, shooting sprees, a beheading, and rape.

Russian Interior Minister Rashid Nurgaliyev used his annual Police Day address last November to remind police chiefs that officers should point their weapons at criminals, and not aim them at law-abiding citizens. Shortly after this, he advised ordinary citizens to "give as good as they get" if they are attacked for no reason by officers.