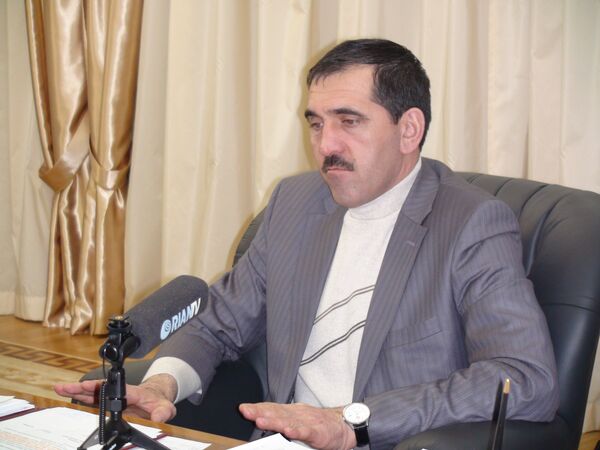 © RIA Novosti . Ilias Burazhev
Subscribe
Judges in Russia's North Caucasus republic of Ingushetia have made an unprecedented bid to accuse leader Yunus-Bek Yevkurov of exerting pressure on the courts.

Judges in Russia's North Caucasus republic of Ingushetia have made an unprecedented bid to accuse leader Yunus-Bek Yevkurov of exerting pressure on the courts.

The council of judges has put out a statement saying that Yevkurov has interfered with the work of the courts, dismissing "unwanted" judges and pressurizing others to pass sentences in his own interests.

The statement, signed by the head of the Ingush Council of Judges, Magomed Daurbekov, was sent to Russian President Dmitry Medvedev and other senior officials.

"We have long been tolerating attacks from the president [Yevkurov], believing that in time he would gain the necessary experience of cooperating with the different governmental structures and would conform to the principle of the separation of powers as laid down in the Russian constitution," the statement said.

The judges complained that while there had been problems with former presidents, Ruslan Aushev and Murad Zyazikov, who had ruled the republic "as if it was a military base," Yevkurov had gone too far.

"Having begun with criticism of particular judicial decisions, the president [Yevkurov] has gradually started to groundlessly accuse the entire legal system of corruption and involvement with people engaged in terrorist activities," the statement said.

In particular, the president's attacks have targeted the chairman of the republic's Supreme Court, Mikhail Zadvornov, an ethnic Russian who is wound up in a tight network of family and clan ties on which the Caucasus republics are traditionally based.

Yevkurov claimed earlier the judges were "unscrupulous" and corrupt, describing them as criminals "worse than a dozen Chechen militants put together" and saying he did "not compel them to flout the laws."

Daurbekov said Yevkurov's accusations were "groundless," explaining that the "campaign to discredit judges is aimed at replacing unwanted judges."

Experts say the move is unprecedented in the history of modern Russia, as the judicial power has for the first time publicly accused the executive branch of exploiting political pressure to achieve its own ends.

"This feud is further evidence that there is no independent law in our country," a senior Ingush lawyer said. "The executive branch is used to boss everybody around, so it is trying to line the judges up."