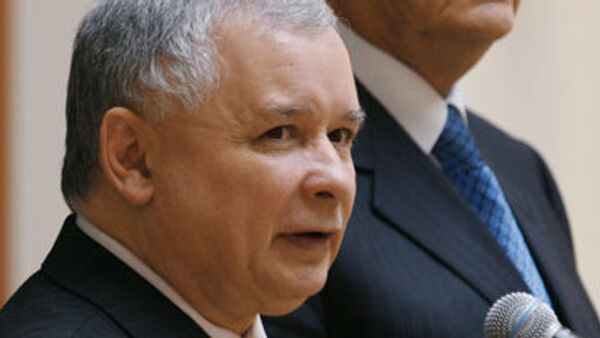 © RIA Novosti . Sergei Starostenko
Subscribe
Polish President Lech Kaczynski is planning to attend on April 10 a memorial service in western Russia to mark the massacre of thousands of Polish POWs by Soviet forces in WWII.

Polish President Lech Kaczynski is planning to attend on April 10 a memorial service in western Russia to mark the massacre of thousands of Polish POWs by Soviet forces in WWII, the Polish prime minister said.

"The Russian side knows about President Kaczynski's intenion to attend the events in Katyn and knows the date [of the planned visit]. The official notification will be sent to Russia when we know the full composition of the Polish delegation," Donald Tusk told reporters on Friday.

Tusk has already accepted an invitation by Russian Prime Minister Vladimir Putin to attend the memorial service in Katyn on April 7.

"We should prepare these two events [on April 7 and April 10] in a dignified manner because it is important both for Russians and the Poles," Tusk said.

Over 20,000 Polish officers, police and civilians taken prisoner during the 1939 partitioning of Poland by the Soviet Union and Nazi Germany were killed in the Katyn forest in 1940, as well as in prisons and other locations, by the NKVD, the forerunner of the KGB.

The Soviet Union acknowledged the massacre in 1990. Modern Russia also recognized Soviet responsibility for the mass shooting, but has not classified it as a war crime, something Warsaw has demanded.

The two Slavic nations have recently been at odds over Soviet leader Joseph Stalin's 1939 deal with Nazi Germany, which Warsaw says triggered the invasion of Poland and the start of WWII.

Putin moved to heal the rift over the massacre and the 1939 deal when he visited Poland in September to mark the 70th anniversary of its invasion. He called the killings "a crime" but urged "forgiveness." He said all European countries bear their share of responsibility for the outbreak of the war.