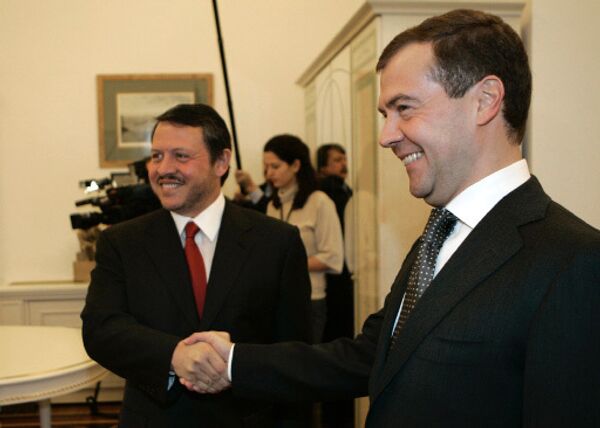 Russian President Dmitry Medvedev and King Abdullah II of Jordan will focus on the Middle East settlement and the post-election situation in Iraq along with bilateral trade and economic relations during talks in Moscow on Thursday.

Russian President Dmitry Medvedev and King Abdullah II of Jordan will focus on the Middle East settlement and the post-election situation in Iraq along with bilateral trade and economic relations during talks in Moscow on Thursday.

King Abdullah II of Jordan, who arrived in Russia on Wednesday morning for an official two-day visit, held talks on bilateral business relations with Russian Prime Minister Vladimir Putin later in the day.

"The situation in the Middle East peace process will certainly become a central issue during the upcoming talks in Kremlin," the presidential press service said in a statement.

"Russia and Jordan take as a premise that in the situation when a dangerous pause in Palestinian-Israeli talks has protracted for more than a year, it is important to not allow the destabilization in the region and to find a way towards the resumption of a full-fledged dialogue between the sides," the statement said.

The Palestinian national authorities recently agreed to hold indirect talks with Israel mediated by the United States after a 15-month break.

Meanwhile, the Israeli government announced plans to build 1,600 new housing units in East Jerusalem, the move, condemned by the Palestinian, U.S. authorities and the European Union.

A meeting of the Quartet of international mediators in Israeli-Palestinian peace talks, which comprises Russia, the United States, the European Union and the United Nations, will be held in Moscow on March 19.

The Russian and Jordanian leaders are also expected to discuss the prospects for stabilizing the situation in Iran, where parliamentary elections tool place on March 7.

The agenda of the talks also includes bilateral military cooperation and joint projects in hi-tech and tourism spheres, as well as in the sphere of peaceful uses of atomic energy.

This is the 10th visit of King Abdullah II to Russia since he had been enthroned in January of 1999.