Military reform in times of crisis 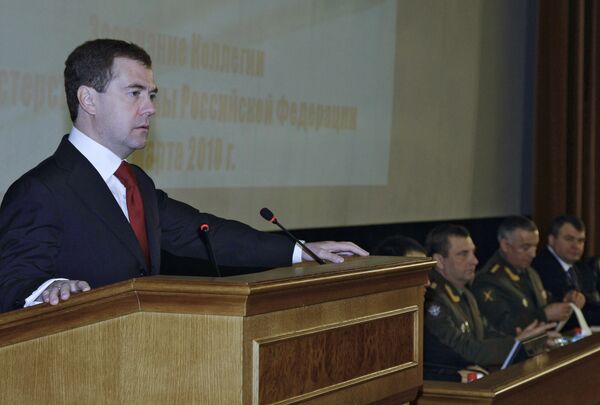 On March 5, 2010, Russian President Dmitry Medvedev attended an expanded meeting of the Ministry of Defense in Moscow. The focus of this meeting was the ongoing military reform.

On March 5, 2010, Russian President Dmitry Medvedev attended an expanded meeting of the Ministry of Defense in Moscow. The focus of this meeting was the ongoing military reform.

The Russian war machine has not undergone such extensive restructuring in the past 150 years. New tables of organization were introduced in the army in early 2009. The four-tier troop-control system consisting of military districts, armies, divisions and regiments was replaced with a three-tier system consisting of tactical commands, brigades and battalions.

The reforms have established new army brigades while disbanding a large number of reserve units to be called up in the event of a full-scale mobilization. The army is being prepared to fight in local and regional conflicts of varying intensity, which are now considered the most likely form of military engagement for Russia.

President Medvedev said that there is still the potential for conflict near the Russian border. As an example Medvedev cited the rebuilding of the Georgian army following its defeat in the five-day war fought with Russia in August 2008.

As nuclear war is the only form of large-scale war imaginable under present circumstances, it is essential to preserve Russia's strategic nuclear forces.

The army reforms have not been painless. In 2009, only a few units received excellent marks, and serious problems remain with respect to military cohesion. Nevertheless, it is still too early to draw conclusions based on the results of the first year. In effect, this was the first combat-training season under the new regime, and it is very difficult to score excellent marks from the get-go.

The crisis has also affected military reform. Against the backdrop of a bad economy, Russian leaders were forced to scale back the role of contract soldiers and to draft more conscripts again. In light of Russia's demographic problem and the declining number of eligible conscripts, two-year military service may be reinstated in the near future, making it possible to call up fewer conscripts and to improve military-training standards.

The crisis has also affected the formation of a professional sergeant corps. Warrant officers who were to have been replaced with contract sergeants and sergeant majors continue to serve with the Army and the Navy.

Dmitry Medvedev has remarked on the even more serious problem of shortages of modern weapons in the Russian army. The Armed Forces have not received any new weapons systems in over 15 years. Consequently, their military equipment must be updated more quickly than in conditions of steady development.

The number of government defense contracts must be increased considerably in order to accomplish this objective. The Armed Forces must receive an annual minimum of 35 ballistic missiles, 50 new and 50 upgraded warplanes, 20 to 25 military helicopters, 3-4 sea-going and ocean-going warships, 2 nuclear-powered submarines and 1 diesel-powered submarine, etc.

However, output is still lagging behind these targets. The defense industry has started to gradually increase production in order to equip the Army and strategic nuclear forces, but production of warplanes for the Air Force and ships and submarines for the Navy remain seriously behind schedule. Current procurement volumes will be able to replace no more than 50% of available Air Force and Navy equipment, which could seriously impair our national defense capabilities.

Top officials at the Ministry of Defense admit that there are not enough government defense contracts at present. In December 2009, Defense Minister Anatoly Serdyukov told Rossiiskaya Gazeta that the current volumes of government orders for military equipment are not final, and that they would continue to increase.

However, Serdyukov also admitted that it is unlikely that the Russian defense industry could accomplish this objective unless it were overhauled, the details of which are currently under discussion.

The Russian Armed Forces are now forced to buy foreign military equipment. There are plans to acquire two Mistral-class amphibious assault ships from France and to build two more at Russian shipyards under a French license. This deal aims to provide the Russian Navy with additional new ships and to overhaul the ship-building sector.

Top Russian political and military leaders are openly discussing the problems facing the national Armed Forces. This is a positive development, as it shows that they understand the problems. However, the extent to which they understand is still not clear, as the military reforms and the system for awarding government defense contracts remain highly classified.

The public, the media and the military itself often learn about changes only after they are well underway, making it extremely difficult to correct any missteps.