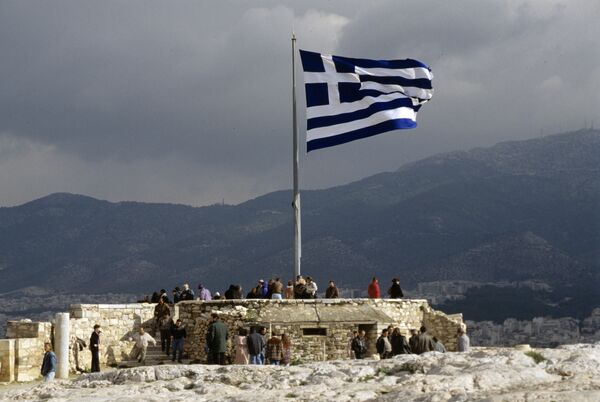 The vote on the bill, which stipulates an increase in consumer taxes and cuts in public sector workers' salaries, took place in the Athens-based legislature amid large-scale protests, which swept through the country in the past few days.

Clashes between police and demonstrators turned violent in Athens and other Greek locations, with protesters throwing stones at riot police and officers responding with tear gas.

Leader of the country's trade union umbrella group Yiannis Papagopoulos was reportedly attacked with empty bottles by a group of youths on Friday while addressing demonstrators in Athens. He was admitted to a local hospital with minor injuries.

Greece's soaring debt caused an economic crisis in the country, which placed the largest strain to date on the European nation. The country has pledged to get its budget deficit, which currently accounts for almost 13% of its GDP, back below the nominal EU maximum of 3% by the end of 2012.

The European Union has expressed political support for Greece, but did not promise any financial assistance to the Balkan state.

The Greek authorities have said they will tackle the crisis by themselves.

The adopted austerity package, which accounts for 2% of the country's GDP, is intended to save more than $6.5 billion in Greece's budget costs.

On Friday, after a meeting with Greek Prime Minister George Papandreou in Berlin, German Chancellor Angela Merkel denied media reports that Greece could quit the European Union over its economic difficulties.