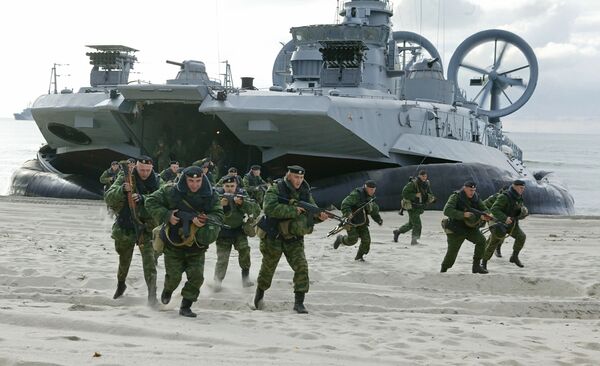 © RIA Novosti . Igor Chuprin
Subscribe
International
India
Africa
NATO has announced it will hold military exercises involving fighter planes over the Baltic Sea this month, the first in a series of military drills to be held this year near the Russian border.

NATO has announced it will hold military exercises involving fighter planes over the Baltic Sea this month, the first in a series of military drills to be held this year near the Russian border.

The exercises will demonstrate "NATO solidarity and commitment to its member countries in the Baltic region," a spokesman for the Allied Air Headquarters said.

The military events will continue in June in northern Estonia, where up to 500 U.S. Marines and Estonian soldiers will be involved in a ten-day drills about a hundred km from the Russian border, Russia's Kommersant daily said on Thursday.

Another joint military exercise of NATO and the Baltic states will be held in Latvia this autumn. Involving over 2,000 personnel from Latvia, Lithuania, Estonia and the U.S., the exercise will be the largest in the area since the three countries joined the alliance in 2004.

Leaders of the three former Soviet Baltic states have repeatedly spoken in favor of large-scale military exercises in the region with the participation of NATO's European contingent since the August 2008 war between Russia and Georgia.

Their concerns seemed to be further aggravated by the Russian-Belarusian Zapad 2009 exercises, held last September in Belarus. Some Baltic politicians said the drills, involving around 13,000 service personnel, 63 airplanes, 40 helicopters, 470 infantry fighting vehicles, 228 tanks and 234 artillery pieces, were to train "various plans of assault" on some Baltic states, Kommersant said.

Russia's deal to buy four Mistral warships from France also caused a stir in Latvian, Lithuanian, Estonian and Polish military circles. The deal, if concluded, will be the first-ever military sale to Russia by a NATO country.

The NATO spokesman said however there was "no relationship between our training event and the potential Mistral deal."