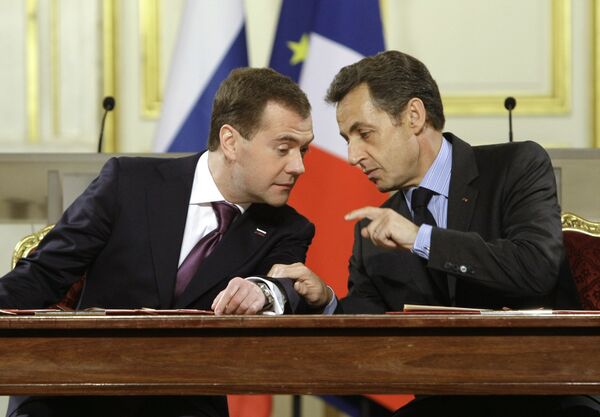 © POOL
/
Go to the photo bank
Subscribe
Russian President Dmitry Medvedev said Monday he does not rule out sanctions against Iran but added that if used, they should be balanced and wise and not target civilians.

Russian President Dmitry Medvedev said Monday he does not rule out sanctions against Iran but added that if used, they should be balanced and wise and not target civilians.

"Iran is a difficult topic, now practically any talks with my European colleagues, with my American colleagues touch upon Iran in this way or that. Unfortunately, we have not moved forward recently - the opposite, the situation is degrading," Medvedev told journalists after talks with his French counterpart, Nicolas Sarkozy.

"Unfortunately, our exhortations to Iran's leadership, our calls to work on a civilian nuclear program under the oversight of the international community, have not produced results yet," he said.

"We are optimists, and we have not lost the feeling that we can achieve success. But nevertheless, should we fail, and I have repeatedly said this, Russia is ready, together with our other partners, to consider the issue of imposing sanctions," he said.

"The sanctions should be balanced and wise, they should not be aimed against civilians, and they should mark a last resort, beyond which dialogue is no longer possible," the Russian president said.

But Medvedev said it would be "desirable if sanctions could be avoided."