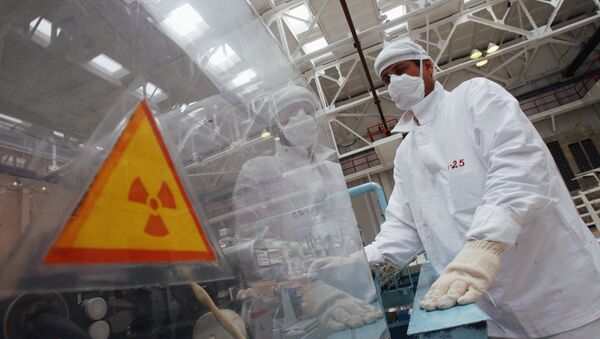 © Sputnik / Ruslan Krivobok
/
Go to the photo bank
Subscribe
France carried out nuclear tests on its servicemen in the 1960s to study the effect of radiation on humans, according to a secret report uncovered by French media.

France carried out nuclear tests on its servicemen in the 1960s to study the effect of radiation on humans, according to a secret report uncovered by French media.

The 260-page document, reported by Le Parisien newspaper on Monday, said the experiments were carried out on French soldiers in Algeria's Sahara Desert in 1960-1966. The unattributed report was apparently written by one or several military officers in 1998, after nuclear tests were officially prohibited by then-French President Jacques Chirac.

According to the report, the experiments, intended to study the possibility of carrying out offensive and defensive operations in a contaminated area, involved some 300 infantrymen and tank crews, the paper said.

The French military authorities reportedly intended to "study the physical and psychological effect of nuclear weapons on humans."

The report said that on April 25, 1961, the soldiers were ordered to go on foot toward the site of a nuclear explosion 20 minutes after detonation. They covered 2 kilometers (1.24 miles), observed the destruction caused by the explosion from a distance of 1.1 kilometers (0.7 miles) and stopped some 0.7 kilometers (0.43 miles) away from the explosion's epicenter.

An hour after the blast, a vehicle patrol was ordered to carry out a raid to "point zero." They stopped just 275 meters (900 feet) away from the epicenter.

The experiments showed the soldiers were "able to continue fighting as they did not suffer serious moral harm," the report said. The conclusion was that in case of war, a direct nuclear strike would be needed to disable the enemy.

French Defense Minister Herve Morin did not comment on the report, saying he was unaware of it. He also pointed to a French law which stipulates compensation for victims of nuclear tests.

In March 2009, Morin said his ministry would spend some 10 million euros ($13.6 million) annually on compensation for victims of nuclear experiments, which were carried out in 1960-1966 in Algeria's Sahara Desert and in Polynesian islands and involved some 150 French servicemen.

According to media reports, the tests affected some 2,000 Polynesian residents, including 600 children under the age of 15.