Medvedev calls for clean up of Russian oil sector 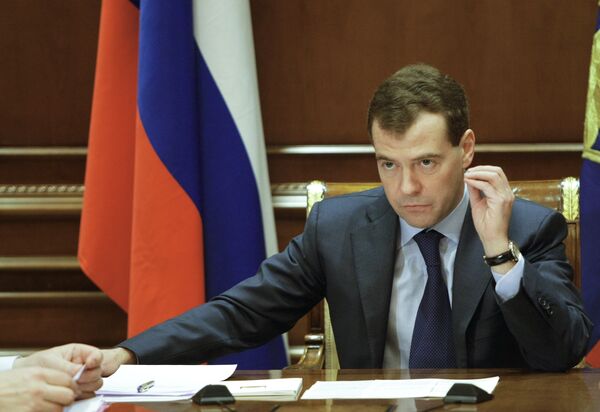 © RIA Novosti
/
Go to the photo bank
Subscribe
Russian President Dmitry Medvedev described on Friday the national oil sector as "a semi-sacred cow" and urged measures to combat criminal activity in it.

Russian President Dmitry Medvedev described on Friday the national oil sector as "a semi-sacred cow" and urged measures to combat criminal activity in it.

"We have to clean up the sector. Clearly, our oil industry is a semi-sacred cow, because in large we owe our existence to it, but that does not mean it should be beyond control," Medvedev said at an energy conference in West Siberia's Omsk.

He demanded that mini-oil refineries 'declassify' their owners.

"As to mini-oil refineries, I would like them to provide reports on their owners to me... I instruct law enforcements to shake up the entire system," the president said.

Alexander Dyukov, general director of Gazprom Neft, the oil arm of Russian energy giant Gazprom, said earlier 196 oil refineries had been built and gone into operation in Russia in the past five years, of which just 80 had been officially registered and certified.

Dyukov also said motor fuel accounted for a mere 15%-17% of output by mini-oil refineries, and that even that share failed to meet technological standards. He said the scheme allowed for the export of semi-finished products, with the owners of such oil refineries earning large sums at the expense of the budget.

"Where is the money channeled? Maybe it is invested in terrorism?" Medvedev asked rhetorically.

However, he said despite some drawbacks, the country's large crude producers managed to observe the law.

The president also ordered the Federal Antimonopoly Service (FAS) and the government to establish control of oil exchange trading.

"Without regulated [oil] trading, we will continue having weak price-forming mechanisms," Medvedev said.

Meanwhile, a Moscow court ruled on Friday that Yukos founder Mikhail Khodorkovsky and his business partner Platon Lebedev must spend another three months in pretrial detention rather than return to regular jail.