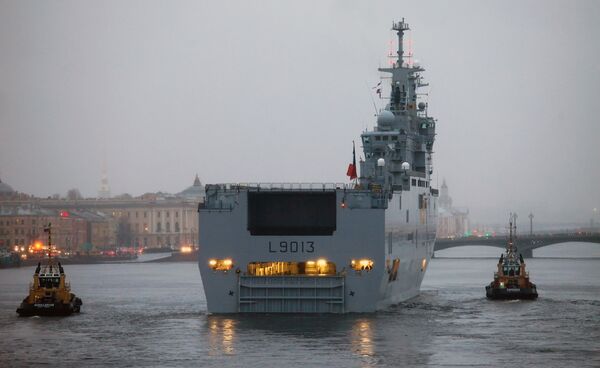 © RIA Novosti . Danichev Alexey
/
Go to the photo bank
Subscribe
Lithuania's defense minister said that a decision by NATO member France to sell Russia a top-of-the-range warship demonstrates that the alliance is no threat to Moscow.

Lithuania's defense minister said that a decision by NATO member France to sell Russia a top-of-the-range warship demonstrates that the alliance is no threat to Moscow.

France said on Monday it had agreed to sell Russia a Mistral-class warship, worth 400-500 million euros (around $600-$750 million), despite concerns by some of Russia's former Soviet bloc allies, including those now in NATO, that the sale could threaten regional security.

The deal is the first sale of a major piece of military equipment by a NATO member to Russia.

"The decision to export advanced offensive military equipment to Russia demonstrates a particular trust between France and Russia. I advise Russia to also trust NATO and not to view the North Atlantic alliance as a threat to its national security," Rasa Jukneviciene said.

"I hope that this issue will be discussed at the next meeting of EU defense ministers in Spain," she added.

Despite strong opposition in the Russian defense industry, the military has insisted Russia needs Mistral-class warships to modernize its aging fleet of combat surface ships.