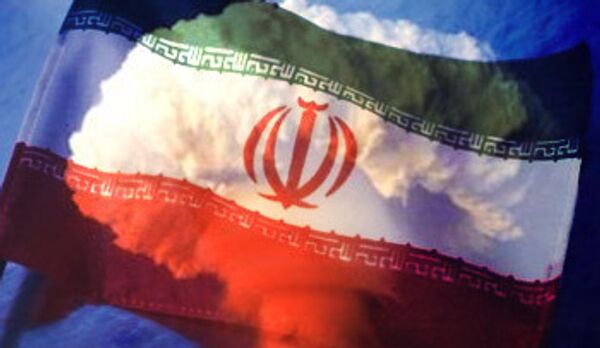 Iran's nuclear energy program started in the mid-1950s under the Shah Mohammad Reza Pahlavi after the founding of the Tehran University Nuclear Center. It began development in the field of nuclear energy with the United States, with which Iran signed a civil nuclear cooperation agreement as part of the U.S. Atoms for Peace program in 1957. In accordance with this treaty, Washington agreed to deliver nuclear plants and equipment, as well as train personnel.

In 1958, Iran became a member of the International Atomic Energy Agency (IAEA). In 1963, Iran signed the Treaty Banning Nuclear Weapon Tests in the Atmosphere, in Outer Space and Under Water, and the Nuclear Non-Proliferation Treaty (NPT) came into effect on February 2, 1970.

In 1973, Iran started to implement a peaceful nuclear energy program. Initially, it had the goal of building 23 nuclear power plants and producing atomic energy. In 1974, the Atomic Energy Organization of Iran was founded (AEOI). Its main purpose was to sign contracts with foreign companies exporting nuclear energy technology.

From 1967 to 1977, the U.S., as well as Belgium, France, West Germany, Italy and Britain actively participated in the development of a nuclear energy program in Iran, which led to the signing of a number of contracts to supply fuel to future nuclear power plants, train personnel and other forms of cooperation, including construction of two nuclear power plants in Bushehr and Ahvaz. According to the plan developed with cooperating countries, the implementation of Iran's nuclear power program and diversification of its sources of power supply were expected to be completed in 1994.

All of these plans were mostly left unrealized and ended up frozen as a result of the 1978 Islamic Revolution. Immediately after coming to power, the spiritual leader of the Islamic Revolution, Ayatollah Khomeini, froze construction of the nearly completed nuclear power plant in Bushehr.

In the early 1990s, Iran resumed its nuclear program. Russia and China became the main sources for know-how and technology for Iran's nuclear sector. In 1992, Iran signed a protocol on cooperation in the atomic energy sphere with China and the treaty On the Use of Nuclear Energy for Peaceful Purposes with Russia.

Iran's current nuclear program, according to the country's leadership, pursues exclusively peaceful goals. It is intended to diversify energy sources in order to meet the demands of the Iranian economy for new generating capacity. In addition, the Iranian nuclear program, which the Iranian government and society have deemed a nationwide project, is intended to reduce Iran's oil dependency in its energy consumption structure, as well as create conditions in the foreseeable future for nuclear fuel exports to other countries.

According to a law enacted in 2005 by the Iranian parliament, the government of Iran is obligated to develop a full nuclear fuel cycle, provide for the generation of 20,000 megawatts of power in the country and build 20 nuclear generating units.

Iran possesses a solid base to implement these plans. Analysts estimate that the total number of completed nuclear infrastructure facilities could reach 20. All of them will be under the jurisdiction of the Atomic Energy Organization of Iran. Among the major and more well-known projects in the nationwide nuclear program are:

On April 11, 2006, Gholam Reza Aghazadeh, the head of the Atomic Energy Organization of Iran and Vice-President of Iran for Atomic Energy, said in a live broadcast that on April 9, 2006, Iranian scientists at the nuclear facility in Natanz were able to enrich uranium to 3.5% uranium-235 on the first cascade of the centrifuges. In other words, they were able to produce the low-enriched uranium needed for producing fuel for nuclear power plants.

A month later, Aghazadeh announced that nuclear scientists were able to enrich uranium to 4.8%.

In late September 2009, Iran informed the IAEA of the construction of a second uranium enrichment facility in Qom. According to an IAEA report, the nuclear watchdog has information that the project was started in 2002, frozen in 2004 and resumed in 2006.

In November 2009, it was announced that the government of Iran sanctioned the construction of another 10 uranium enrichment facilities, five of which it would start building immediately.

A confidential report by IAEA Director General Mohamed ElBaradei to the IAEA Board of Governors stated that as of November 2, 2009, almost 4,000 centrifuges were operational in Iran and another 4,700 were being installed. The report stated that according to data from an IAEA inspection, as of November 17, 2008, from the start of operations in February 2007, 9,956 kilograms of UF6 (uranium hexafluoride) was fed into the cascades and 839 kilograms of low-enriched UF6 were produced.

Previously, Ali Akbar Salehi, the head of the Atomic Energy Organization of Iran, said the country had created a new generation of uranium enrichment centrifuges - a cascade of 10 centrifuges, which were undergoing mandatory testing.

The Iranian authorities have said more than once that the country needs 50,000 centrifuges in order to supply its future nuclear power plants with fuel.

Six countries -China, France, Germany, Russia, Britain and the U.S. - are conducting negotiations with Iran in order to convince the country's leadership to abandon the suspected development of a nuclear weapons program.

In recent years, on the initiative of these six countries, the UN Security Council has adopted five resolutions on Iran's nuclear program. Three resolutions, 1737 of December 2006, 1747 of March 2007 and 1803 of March 2008, involve sanctions against Iran in conjunction with its unwillingness to place a moratorium on uranium enrichment and cease the development of its missile program. Resolution 1803 stipulates banning travel for a number of individuals involved in the development of Iran's nuclear program, freezing the bank accounts of several Iranian companies and banks, as well as shipment inspections.

Tehran refused to fulfill the provisions of these documents and has ruled them unlawful.