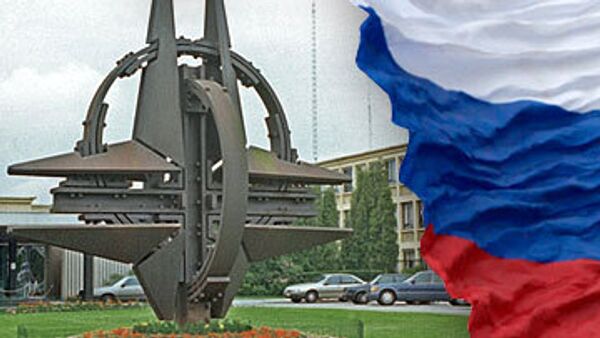 Makarov and di Paola approved a framework agreement on Russia-NATO military cooperation. At their upcoming meeting, scheduled for May 6, 2010, the chiefs of general staffs plan to approve this document and a detailed program of bilateral cooperation.

What format can this cooperation have, and how will it benefit both sides? Russia and NATO have many common interests, including counter-terrorist operations, control over the non-proliferation of weapons of mass destruction, the fight against illicit drug trafficking, promoting navigation safety, etc.

At the same time, Moscow and Brussels remain divided on some issues. Such disagreements primarily concern NATO's eastward expansion and the overall European security system.

For instance, the sides have still failed to reach agreement on the Georgian issue, which remains a bone of contention.

Rasmussen's visit to Moscow in December 2009 confirmed persisting Russia-NATO disagreements. The NATO Secretary General said the alliance would not meet Moscow halfway on the Georgian issue and would not stop discussions on the possible admission of Georgia and Ukraine into NATO.

At the same time, NATO needs Russian assistance in important spheres, including the Afghan conflict. Rasmussen called on Moscow to expand its involvement in the NATO-led International Security Assistance Force (ISAF) operations in Afghanistan and to provide ISAF with helicopters, fuel and pilots.

He also said Russia could undertake to train Afghan police officers on its territory.

Moscow agreed to provide such assistance and to handle additional NATO transits via Russian territory. Russia will help the Afghan army to maintain its helicopter fleet mostly comprising Soviet/Russian helicopters.

Moscow's motives for supporting NATO in Afghanistan lie on the surface. Continued ISAF operations in Afghanistan mean that Russia does not have to deploy additional forces along the southern perimeter of its CIS partners and Collective Security Treaty Organization (CSTO) countries.

The continued war in Afghanistan does not make NATO any stronger and forces it to compromise in relations with Russia.

Such a compromise solution has not been found yet. The alliance strives to obtain various benefits from Russia, without giving anything in return. This facilitates serious doubts as regards real prospects for close Russia-NATO cooperation.

Russia-NATO relations will remain in an uncertain and neutral state if NATO leaders stick to their current strategy. This uncertainty will be determined by the fact that neither side wants direct confrontation or is capable of it.

Consequently, various summits and seminars will remain the main format of Russia-NATO cooperation. The sides will exchange polite statements, without resolving any specific issues. Mutual arguments will sometimes give way to simulated humanitarian and peacekeeping missions.

Expanded bilateral cooperation will be further complicated by NATO's extremely cumbersome bureaucratic bodies which have long taken over its command and staff departments and by the tough anti-Russian stance of many new NATO countries supported by some major members of the alliance.

Nevertheless, Russia and NATO will strive to settle important issues. Consequently, Moscow must establish direct relations with NATO countries, primarily the most powerful members of the alliance.

Russia's ties with Germany, France, Italy and now Turkey are particularly promising in this respect. Direct negotiations with these countries make it possible to effectively resolve a broader range of issues than talks with NATO's overly bureaucratic system.

The development of relations between Moscow and Washington is another factor that will determine Russia-NATO relations in the next few years.

In this connection, the new strategic arms reduction treaty (START), currently being discussed by Russian and U.S. diplomats, has great significance. Its clauses will largely determine the format of Russian-U.S. military relations and those between Moscow and NATO as a whole.

Hopefully, such provisions will become known in the run-up to the May 6 meeting between the heads of Russian and NATO general staffs.