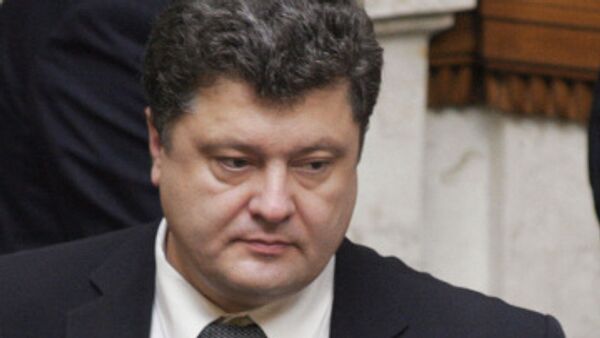 Ukrainian Foreign Minister Petro Poroshenko said Wednesday he is optimistic about the development of his country's relations with Russia.

Ukrainian Foreign Minister Petro Poroshenko said Wednesday he is optimistic about the development of his country's relations with Russia.

"I think totally new opportunities open in relations with the Russian Federation. I will have important talks with Russian Foreign Minister Sergei Lavrov on Friday," Poroshenko said at a meeting of the American Commerce Chamber in Ukraine on Tuesday.

He said the talks will be held in London on the sidelines of a conference on Afghanistan.

Poroshenko said that although bilateral ties are overshadowed by certain differences, problems can be resolved through dialogue.

Russia's new ambassador to Ukraine, Mikhail Zurabov, arrived in Kiev on Monday and presented his credentials to Poroshenko.

After the first round of the January 17 election confirmed that Ukraine would have a new president, Medvedev ordered Zurabov to formally assume his position in Kiev.

Yushchenko received just 5% of the vote in the presidential polls. Opposition Party of Regions leader Viktor Yanukovych and Prime Minister Yulia Tymoshenko received 35.34% and 25.04%, respectively, and will face each other in the February 7 runoff.

Both candidates have pledged to improve relations with Moscow, which have soured in recent years, as Yushchenko sought to distance Ukraine from Russia, pushing the country's attempts to join NATO and the European Union. Moscow and Kiev have also been embroiled in bitter disputes over natural gas supplies and Russia's war with Georgia in August 2008.