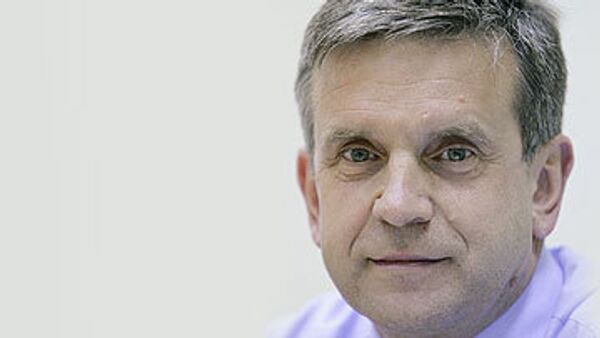 © RIA Novosti . Anton Denisov
Subscribe
International
India
Africa
Russia's new ambassador to Ukraine, Mikhail Zurabov, arrived in Kiev on Monday to take his office delayed by last year's spat between the two presidents, but may face a diplomatic scandal over his credentials.

Russia's new ambassador to Ukraine, Mikhail Zurabov, arrived in Kiev on Monday to take his office delayed by last year's spat between the two presidents, but may face a diplomatic scandal over his credentials.

In August 2009, Russian President Dmitry Medvedev delayed sending Zurabov to Kiev over what he described as unfriendly policies pursued by his Ukrainian counterpart, Viktor Yushchenko. However, following the first round of presidential elections in Ukraine on January 17, Medvedev ordered Zurabov to formally assume his position in Kiev.

A respected Russian business daily, Kommersant, said on Friday the Yushchenko administration was set to advise the Foreign Ministry against accepting Zurabov's credentials, with the Ukrainian president's name reportedly absent on the diplomatic documents.

Ukraine's presidential administration said the absence of the president's name on Zurabov's documents is a "violation of all diplomatic norms" and an attempt "to humiliate" Yuschehnko, who is still president, Kommersant reported on Friday.

Ukraine's incumbent president believes Zurabov will present his credentials to a new president. Yushchenko, who garnered slightly over 5% in the presidential elections, will leave office soon after a runoff slated for February 7.

Opposition Party of Regions leader Viktor Yanukovych and Prime Minister Yulia Tymoshenko received 35.34% and 25.04%, respectively, and will go into the runoff.

However, Russian Foreign Minister Sergei Lavrov pledged on Friday Moscow would follow the protocol when presenting Zurabov's credentials to the Ukrainian leader.

A Russian Foreign Ministry official has indicated there are no strict rules obliging countries to indicate the president in their ambassadors' credentials, which are usually submitted to a president months after a new ambassador assumes the post.

The new Russian ambassador is meanwhile expected to present copies of his credentials to the Ukrainian Foreign Ministry later on Monday.

"It's a great honor to represent the interests of the Russian president and Russian people in Ukraine," Zurabov said upon arrival on Monday.

Medvedev gave Zurabov extra powers by appointing him presidential envoy on trade and economic ties with the ex-Soviet republic.

Relations between the two neighbors have soured in recent years, as Ukraine's pro-Western leaders have sought to join NATO and the European Union. Moscow and Kiev have also been embroiled in bitter disputes over natural gas supplies and Russia's war with Georgia over South Ossetia.