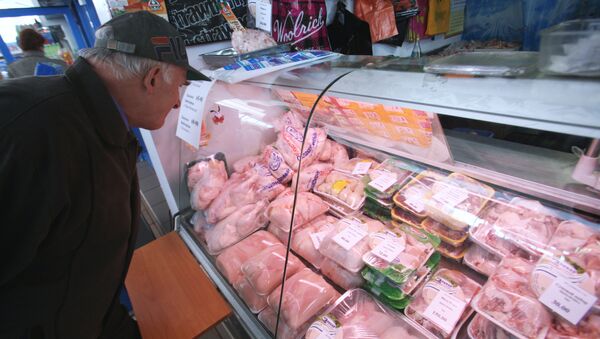 MOSCOW. (RIA Novosti economic commentator Vlad Grinkevich) - Russia and the United States ended their two-day talks on poultry supplies, held behind closed doors, on Thursday. They have coordinated their stands but have not reached an agreement.

MOSCOW. (RIA Novosti economic commentator Vlad Grinkevich) - Russia and the United States ended their two-day talks on poultry supplies, held behind closed doors, on Thursday. They have coordinated their stands but have not reached an agreement.

Analysts say the outlook is positive as the Americans can easily change their technology to suit the new food safety regulations adopted in Russia. Meanwhile, poultry suppliers are using the situation to raise prices.

On January 1, 2010, the Russian consumer authority Rospotrebnadzor banned chicken imports from the Untied States because the chlorine solution used in meat processing exceeds the new Russian norm, 0.5 milligram per liter of water, which came into force this year.

Russian health officials declared the chlorine bath that American companies use to disinfect chickens after slaughter unsafe, and banned the procedure in 2008.

Similar regulations have long been applied in the European Union, and the Russian government says it had informed suppliers about the change in advance and that the bulk of Russian suppliers have adjusted their technology.

Unlike in the European Union, American chicken meat is washed with a 20-50 mg/L chlorine solution. The U.S. poultry suppliers either had no time or were unwilling to adjust their procedure to the new Russian regulations.

Unfortunately, this situation could have unpleasant consequences for both U.S. producers and Russian consumers.

The Americans could end up with a substantial backlog of poultry meat. Last year, they supplied 750,000 tons of chicken to Russia, which has cut their quota to 600,000 tons this year.

Russian producers currently satisfy approximately 75% of the market demand, and the country imports the remaining 25%. Of that amount, some 80% is imported from the United States, the world's largest poultry producer and exporter, which puts the U.S. share of the Russian poultry market at as much as 20%.

There are other large poultry suppliers in the world, but analysts say the Americans have lower prices. In other words, if the U.S. stops poultry deliveries, prices in Russia may soar by 15%, mostly in the regions, because only a small amount of American chicken quarters is sold in large cities such as Moscow and St. Petersburg.

Initially, the Russian authorities said there would be no shortage of chicken and that prices would not grow. Prime Minister Vladimir Putin also said Russia could search for other suppliers if its American partners find it difficult to comply with the new rules.

But Russia will most likely not have to search for new suppliers because U.S. companies can easily adjust their technology. However, this will take time, which could be the main stumbling block at the talks.

So far, there are no objective reasons for an increase in chicken prices. Zubkov said that all poultry meat imported last year and custom cleared by January 19, 2010 will be sold in the market. Moreover, American suppliers could be given an extension.

However, the International Confederation of Consumer Societies (Russia) claims that poultry prices have started growing, as businesses often see the words "ban" and "shortage" as sufficient reasons to raise prices.

As soon as the ban on American chicken was made public, wholesale prices of U.S. poultry imports soared by 20% and of Russian chicken meat by 10%-12%. The growth is expected to reach the retail market in February or March.

Russia and the Untied States will most probably reach an agreement at their poultry meat talks, and there will be no shortage of poultry meat. But will this encourage suppliers to lower prices?