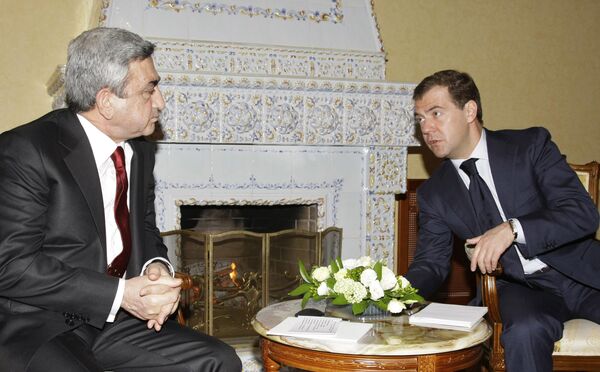 Russian President Dmitry Medvedev and his Armenian counterpart Serzh Sargsyan have discussed a wide range of issues in the sphere of bilateral cooperation, a Russian presidential aide said.

Russian President Dmitry Medvedev and his Armenian counterpart Serzh Sargsyan have discussed a wide range of issues in the sphere of bilateral cooperation, a Russian presidential aide said.

Sargsyan arrived on Monday for a brief working visit to Moscow. The Armenian president is the first foreign leader to visit Russia in 2010.

"The meeting between the two presidents was held in a traditionally friendly and constructive atmosphere," Sergei Prikhodko said.

Energy is a priority in the Russian-Armenian cooperation. The two countries have been discussing implementation of new large-scale joint projects in the mining and processing industries, transportation and communications. Bilateral trade is currently close to $1 billion.

Prikhodko said the presidents also exchanged views on a variety of global issues, on bilateral cooperation in the framework of the Collective Security Treaty Organization (CSTO) and on the Nagorny Karabakh dispute between Armenia and Azerbaijan.

Mediators in the Karabakh conflict - the U.S., Russia and France that comprise the OSCE Minsk Group - reported some important progress in talks between the Azerbaijani and Armenian leaders in Munich late last year, but tensions between the two ex-Soviet republics remain high.

Over 30,000 people are estimated to have died on both sides between 1988 and 1994, when a ceasefire was agreed. Nagorny Karabakh has remained in Armenian control since then.