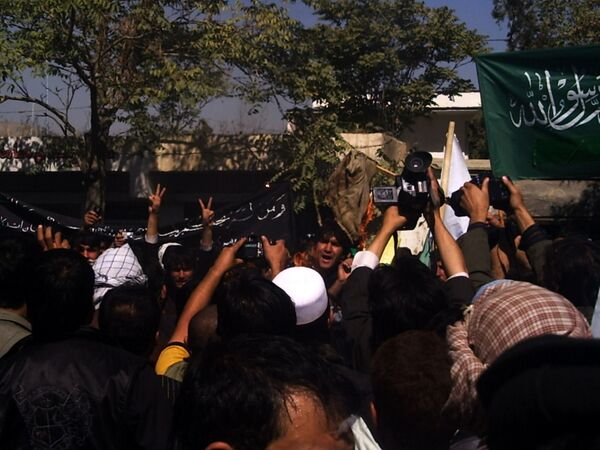 © RIA Novosti . Andrey Greshnov
Subscribe
Hundreds of students in Afghanistan's eastern Nangarhar province protested on Wednesday against the killings of civilians by NATO troops, demanding their withdrawal from the country, local media said.

Hundreds of students in Afghanistan's eastern Nangarhar province protested on Wednesday against the killings of civilians by NATO troops, demanding their withdrawal from the country, local media said.

The demonstrators reportedly blocked a major highway linking the Afghan east with country's central provinces, screaming out "Obama must die!" and "Karzai is so dead!"

They said NATO troops "did not establish democracy in our country, they just kill our religious activists and children."

The protest broke out after a Saturday's NATO airstrike in the eastern Kunar province killed a group of civilians, including several children, sparking a series of protests in the province's administrative center, Asadabad.

"The government must put an end to the holding of uncoordinated operations by foreign troops, otherwise, we will throw away our pens and textbooks and take up arms to fight against the invaders," students of the Nangarhar University who took part in the Wednesday's protest said in a statement.

Earlier on Wednesday, representative of the president's administration Asadullah Wafa, who heads a commission investigating the bombing, confirmed the deaths of civilians and said teenagers aged from 13 to 18 were among those killed.

A representative of the United Nations Assistance Mission in Afghanistan (UNAMA) said on Tuesday the number of civilians' deaths caused by NATO military operations in the country has risen by 10% this year over 2008.

The NATO-led International Security Assistance Force (ISAF) and a separate U.S.-led coalition, involved in Operation Enduring Freedom, have more than 110,000 troops in Afghanistan. The United States has by far the largest force, with over 70,000 troops.

Violence has surged in Afghanistan in recent months, with the radical Islamic Taliban group, which was toppled in a 2001 US-led campaign, staging regular attacks on provincial government officials, police and civilians and planting roadside devices as part of the battle with US and NATO troops.

In early December, U.S. President Barack Obama said in a televised address to the nation that the U.S. would send an additional 30,000 troops to Afghanistan in the first part of 2010 to defeat the Taliban and establish law and order. The first of the extra U.S. soldiers was to arrive in the country in mid-December.