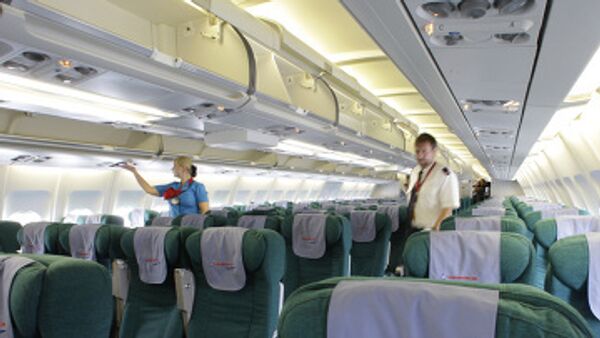 © RIA Novosti . Anton Denisov
Subscribe
A 23-year-old Nigerian man has been charged with attempting to destroy a Northwest Airlines aircraft on Christmas Day

A 23-year-old Nigerian man has been charged with attempting to destroy a Northwest Airlines aircraft on Christmas Day, the U.S. Department of Justice said in a statement.

According to the statement, which was posted on the Justice Department's website late on Saturday, Umar Farouk Abdulmutallab, 23, a Nigerian national, boarded Northwest Flight 253 in Amsterdam, Netherlands on December 24, 2009 and had an explosive device attached to his body.

"As the flight was approaching Detroit Metropolitan Airport, Abdulmutallab set off the device, which resulted in a fire and what appears to have been an explosion. Abdulmutallab was then subdued and restrained by the passengers and flight crew. The airplane landed shortly thereafter, and he was taken into custody by Customs and Border Patrol officers," the statement said.

An investigation into the incident has been launched by the Federal Bureau of Investigation, U.S. Customs and Border Protection, and the Joint Terrorism Task Force.

"We will continue to investigate this matter vigorously, and we will use all measures available to our government to ensure that anyone responsible for this attempted attack is brought to justice," the Justice Department quoted U.S. Attorney General Eric Holder as saying.

Abdulmutallab is currently being treated for burns at the University of Michigan Medical Center. He will make his initial court appearance later today.

The man allegedly claimed after his arrest that he acted on instructions from Al-Qaeda. U.S. security officials confirmed that his name was on the U.S. list of terrorist suspects.