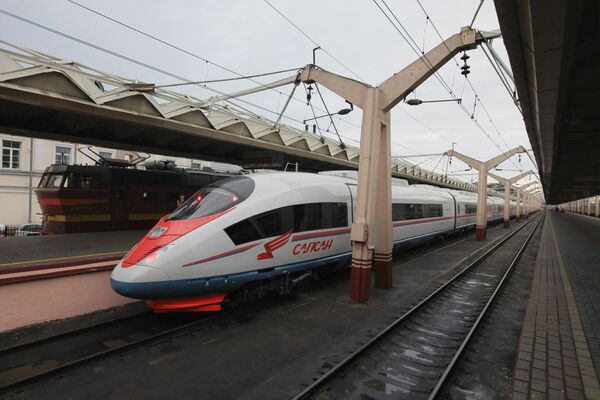 Sapsan, Russia's first train capable of travelling at a speed of 250 kmph (155 mph), will make its first commercial run between Russia's two largest cities on Thursday.

The train will decrease the minimum travel time between Moscow and St. Petersburg from the current record of 4 hours and 30 minutes (Nevsky Express) to 3 hours and 45 minutes. It takes approximately eight hours for most Russian trains to cover the distance.

The train, of the Velaro RUS series, is a joint project between Russia's railway monopoly RZD and Germany's Siemens. It has 10 cars, of which two are first class and eight are second class, and can carry 604 passengers. The track gauge is 33 cm wider than in Germany to ensure it is appropriate for Russia's railroad tracks.

Sapsan made its first unofficial journey in late November, when it evacuated passengers from the Nevsky Express train, which derailed as a result of a bomb attack, killing 26 people and injuring over 90.

The two Nevsky Express trains are due to be removed from the route as Sapsan comes into operation.

RZD signed a deal to buy eight Sapsan trains from Siemens in 2006, followed by a maintenance contract in April 2007.